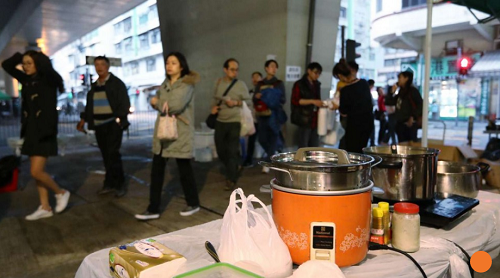 Nine out of 10 people have backed a call to allow hawkers to use gas instead of electric stoves, a survey has found.

The Concerning CSSA and Low Income Alliance, in collaboration with a group called Restoration of Street Food Culture, polled 500 customers at the three-day food bazaar in Sham Shui Po during the Lunar New Year.

The January event was the first time the government legalised street food businesses during the new year festivities. But with hawkers not allowed to use fire due to safety concerns, organisers were forced to spend more than HK$40,000 on power generators and had to run cables from a nearby market to provide electricity.

“In the last food bazaar, the hawkers used electric stoves to prepare their food and that caused some problems. For example, the fuse jumped,” Lee Tai-shing, chief community organiser for the Concerning CSSA and Low Income Alliance, said.

“It would be much better if gas stoves are allowed.”

If hawkers were allowed to use gas, they would save money from not having to set up generators and could provide a wider variety of dishes, organisers added.

More than 90 per cent of respondents to the recent survey backed the alliance’s position and supported the use of gas at the event, saying it stayed true to Hong Kong’s traditional street hawker culture and flavours – a culture that thrived in the 1980s.

“Subject to the prerequisites that public safety is not jeopardised and public acceptance is obtained, the government remains open-minded towards whether it is possible in future to allow reheating food with naked flame in bazaars,” the government said.

Another food bazaar at Sham Shui Po is planned for April 15-16.