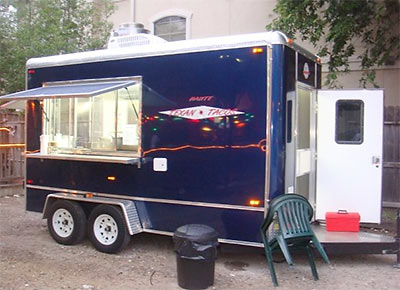 It only took about 18 months but the Chronicle’s junior arts columnist Lisa Gray finally got around to mentioning the problems with the City of Houston regulations for mobile food vendors. As Gray, and almost every other writer who has taken a crack at the subject, pointed out in the last few years street food has exploded across the country.

We’ve all heard how food trucks have become part of the urban food revolution, hell American Public Media’s Marketplace radio program has even reported on how Food Trucks in LA have their own brand of venture capitalists, except in Houston. As the Houston Press and 29-95 have both pointed out, Houston has some of the more asinine regulations regarding mobile kitchens. It’s just that the Chron took awhile to get to the article. Although it’s not nearly as humorous as KHOU’s take on them.

It’s always fun to explore Houston TV news’ view of what should be celebrated, in this case gourmet food trucks targeted at foodies, and what should be feared, taco trucks. In the video included in the 29-95 post KHOU plays on fear of ‘filthy’ establishments while in the video on the Save our Food Trucks site the same broadcast portrays mobile food establishments as the latest hip fad. Unfortunately Gray doesn’t address the discrepancy of celebrating one type of establishment while denigrating another. Then again no one ever complains about the fact that Houston restaurant critics give glowing reviews to Tex-Mex but never talk about Taquerias, either.