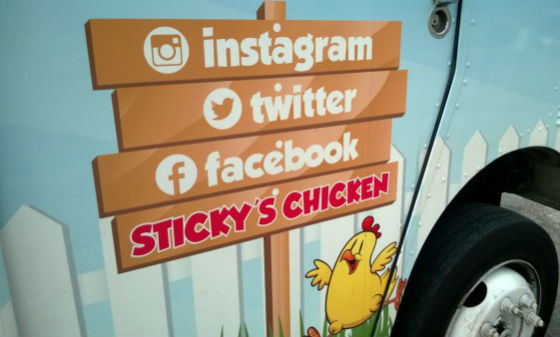 It’s funny–when I was young I was loath to try any food described as “sticky.” I detested the feeling of edible stuff adhering to my body and can recall one particular time I majorly freaked out because I had lollipop juice all over my fingers and there’s wasn’t a sink in sight. (“Gee, Joanna, you sounded like sort of a neurotic child.” You THINK?).

I don’t know what my problem was because now “sticky” is the descriptor tethered to foods I absolutely adore: sticky toffee pudding, sticky rice, sticky buns. And now, I have a whole hosts of dishes to add to the list, thanks to Sticky Chicken food truck.

Okay, technically, it’s Sticky’s Chicken, but having misread and subsequently mispronounced the name about 50 times before I noticed the error, I now can’t think of it as anything but Sticky Chicken. Even if not everything on the menu is self-adhesive.

Tracking down Sticky’s Chicken is for me far easier than other trucks because they regularly park outside Marquis II which I pass by on the way back from the gym (irony noted). When it comes to ordering, I tend to, um, stick to the sticky stuff (HAH!) such as the chicken wings whose crispy poultry meat is glazed with a sweet, slightly spicy sauce that will get all over your hands and face. Also terrific are the sliders, which layer crispy or sautéed chicken (go for the former), “sticky’s sauce,” mayonnaise, and provolone cheese on sweet, buttery Hawaiian rolls.

The major exception to my rule is Sticky’s “chicken over rice” platter, a dish with a most underwhelming name and most overwhelming collections of flavors. Atop a pleasantly oleaginous bed of pungent garlic rice lies a scoop of tender chunks of juicy chicken dressed with three different sweet and savory sauces and dusted with shredded cilantro.

By the way, I’m obviously not the only person in Houston stuck on Sticky’s. During one particular visit, I observed a man inquire as to the availability of their fried vegetables served with cilantro aoli. When informed, very apologetically, that they were out that particular day, the man ambled away with a look of dejection I haven’t seen since a certain Republican poster child lost the Virginia primary.

Next up for consumption on my continued exploration of Sticky’s is its hoagie. I’d also like to try some of the aforementioned favorite dishes with the elective $1 egg to see just how much that improves the flavor.