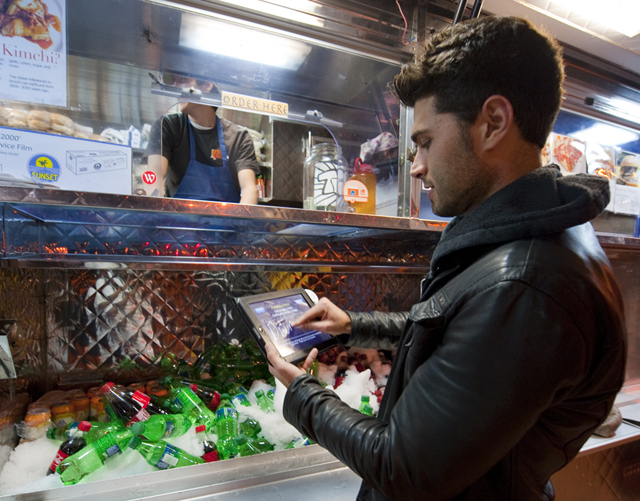 The Social-Savvy Food Truck Series is supported by the Ben and Jerry’s Scoop Truck. For more information on the scoop truck and where it stops, click here.

We know food trucks are embracing social media, but there’s more to running a food truck than marketing on Twitter and Facebook.

There are trucks all over the country that are going high-tech to launch, build and manage their businesses.

Here’s a look at how food trucks are innovating with marketing tools, productivity apps and the truck design itself.

Friends and street-food vendors Valerie Luu & Katie Kwan founded Rice Paper Scissor, a pop-up food cart in San Francisco. Dealing with the logistics of finding locations, planning a menu, marketing and finance means they need to stay organized, and they use notetaking app Evernote to do so.

On the Evernote blog, they write, “We snap photos of potential locations with Evernote on our iPhone — we can then review and discuss potential locations later.” The women also create shopping checklists on the app and religiously check off items and tasks to stay on top of things and within their budget.

“The cool thing about Evernote is that it’s this amazing business tool for us, but it’s also a place to store and track all sorts of ideas. We keep track of ideas for home decor, writing projects, and conversations with interesting people,” they say.

In the world of merchant processing, Square has quickly become a rising star. Just ask the team behind one of the many food trucks that employ the credit card reader on their mobile devices. “We use Square over a traditional POS because it’s simple and we don’t need anything else,” says Angus Gorberg of The Meatyballs Mobile. “The ubiquitous nature of the smartphone means that we don’t have to train new drivers on how to use the app because it’s easy to learn.” Plus, Gorberg says the fact that there are no monthly fees or commitment guidelines and that Square has “tremendous” customer service means Meatyballs won’t be switching from Square any time soon.

As gourmet food trucks knock down the preconceived notion of “street meat,” digital tools like Square make running a mobile business much easier and more efficient, since you don’t have to waste time counting cash or getting change from the bank. “It adds a great tech element to the experience, and we would be super disappointed if we couldn’t get our balls into the mouths of the cashless,” says Gorberg.

Korean BBQ joint Chi’Lantro went digital just in time for this year’s SXSW conference. Like Square, Intuit‘s GoPayment offers a free card reader (with no monthly fee) that works on more than 40 mobile devices. Intuit worked with the popular Austin food truck, which hit up various SXSW hotspots, offering 25-cent tacos to those who followed the truck on Twitter and paid by credit card.

Jae Kim, owner and founder of Chi’Lantro BBQ, says the promotion was a win-win and is proud that his food truck uses iPads and Androids as credit card machines, which is convenient both for the business and the customer.

Mobile Meteor is a company that helps businesses create mobile websites. The rise of the food truck, though, has expanded their business, and now it has functionality that works with a food truck’s existing Twitter account. Food trucks, such as New York’s Frying Dutchmen, for example, send a tweet to @Mvendor with “#open” plus the truck’s address, and a pin automatically appears on a map on the business’s mobile website. Tweeting with “#closed” removes the location on the map. Truck owners can also use a web app and their smartphone’s internal GPS to update the truck map, without having to log in to Facebook or Twitter. Click here to see a Prezi that explains how Mobile Meteor works.

Since Twitter and Facebook are blocked at a lot of businesses (especially at financial firms in neighborhoods like Midtown Manhattan), Mobile Meteor provides another way for trucks to share their ever-changing locations with hungry customers — on their smartphones.

Another SXSW food truck and tech integration came from QR-code startup Paperlinks — apparently digital-food partnerships happen when digital natives are crammed into a food truck mecca for a week. By scanning a branded QR-code sticker for Austin Food Carts, SXSW-goers could access a list of truck locations, a Twitter feed and information about the Austin food truck scene.

Paperlinks provides QR-code marketing solutions for individuals and businesses — the company has a self-serve online platform for creating a QR-code, a QR-code scanning app (although the codes scan with any QR-code reader) and design and printing services for designer QR-codes and large-scale campaigns, like the one at SXSW. Paperlinks is in talks with other food carts in L.A. and San Francisco.

6. Make Your Own App: Schnitzel and Things

Looking to order your favorite food truck dish? There’s an app for that. In fact, some food trucks make their own app for the customer’s convenience. Digitally savvy New York food truck Schnitzel and Things has an app on which you can place your schnitzel order and find out where to pick it up, since the truck location changes daily.

Looking to make your own app? Here are some tools to help you do so.

Mobi Munch is a one-stop shop for would-be food truck entrepreneurs. They can purchase mobile food infrastructure, learn how to use social media tools, design a menu, have access to human resources tools and get tips on how to scout and reserve locations. The package has a $125,000 price tag, which is apparently a reasonable price for a food truck concept. Like we said, it’s a one-stop shop, and several prominent food trucks were built on the structure, including Nom Nom Truck, one of Los Angeles’ most popular snack mobiles.

8. Digital Menu Board: Jack in the Box

While many food trucks keep it simple and write a chalk menu each day — perhaps even changing menu items daily — one food truck has the deep pockets to finance something a bit snazzier. Fast food chain Jack in the Box has a 34′-long Munchie Mobile food truck that boasts a 47-inch digital menu board. Obviously the advantage of a digital menu board as opposed to a chalk one is that the images can change. So what does Jack’s digital display show? Spokesperson Brian Luscumb admits that it’s pretty static and lists menu items, pricing and food shots. However, if the Munchie Mobile is at an event or running a promotion — like when the truck team was giving away free tacos at a March of Dimes event — then screen can be updated to reflect the offerings.

There’s a lot of potential for digital menu boards, as a food truck can display Twitter feeds, YouTube footage, truck locations and photos of the staff and consumers — it’s a blank canvas on which food trucks can get really creative and ramp up branding efforts.

Tapviva’s three co-founders lived in the Bay Area when they got fed up with waiting in line for ten minutes at Starbucks. It occurred to them: Why can’t we order and pay ahead of time on our phones, pick up our coffees and go? Basically, they wanted their food to wait for them, not the other way around.

Tapviva is currently running at La Cocina, a non-profit that helps mostly low-income Latina women start food businesses. Beginning next week, the Tapviva mobile ordering solution is going live at several La Cocina-affiliated carts and kiosks in the San Francisco area. The Tapviva platform will be onboard a grilled cheese cart that’s opening in Central Park this summer — Manhattan yuppies can have their grilled cheese prepped for them without having to pause their frisbee game. Tapviva’s pre-ordering system is reminiscent of the Zingle text-message ordering service, which will also be launching on New York food trucks later this year.

What other digital integrations have you seen on tech-savvy food trucks? Let us know in the comments.

The Social-Savvy Food Truck Series is supported by the Ben and Jerry’s Scoop Truck. In New York City or San Francisco and want a free scoop? Follow @BenJerrysTruck and @BenJerrysWest for details!