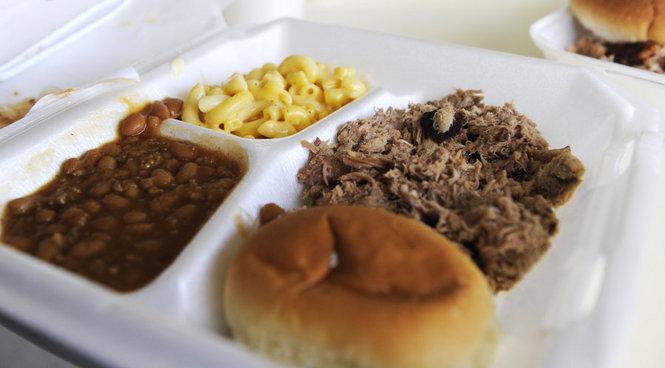 You can see the large red truck parked in front of the desolate shopping center from quite a distance. Passing by Alabama A&M’s Louis Crews Stadium, the sizable grill attached to the truck is also in view and you can hear the generator, too.

I ordered the pulled pork plate with mac-and-cheese and vinegar slaw. Sans sauce, it can be difficult to ascertain one barbecue joint’s pulled pork from another’s. Not an issue at Badd Newz. Their pork is seasoned noticeably spicier, but not so much that it induces sweat or evokes torture. Nice.

The mac-and-cheese was solid, but the vinegar slaw, which was sweet and chunky, was exceptional and provided perfect counterpoint to the spicy meat.

However, Badd Newz’s barbecue sauce tasted suspiciously like Kraft Mesquite Smoke. So none in our dining party really used too much of it. Which is good because even though we ordered food for six, we were given only one small single-serving sized container of sauce. And only three forks. And we were short a piece or two of cake and a drink.

Brooklyn-Nets-cap-wearing cashier was kind, if not hurried or detail-oriented. And it only took about 12 minutes for our large order to be brought out with a smile by a salt-and-pepper-bearded cook.

We also ordered a rib plate. The ribs were super-tender – the meat literally fell of the bone – with a good smoky and peppery taste. Very meaty and, for ribs, not overly fatty. An accompanying ice-cream-scooped side of potato salad featured well-balanced mustard and onion flavors and chunks of egg. But deeper into the serving, flavors and ingredients became uneven. A few more stirs in prep, and this side is a hit.

Our order also included pulled smoked turkey, boasting that tasteful spiciness, in both sandwich and plate configurations. The plate worked well – again, the slaw was an ideal pairing. The turkey sandwich, served on a standard barbecue bun, would really benefit from the addition of slaw on it, as its flavor was one-note.

Badd Newz’s serving sizes were right on. Enough to satisfy but not enough to make you a viable body double for New Jersey Governor Chris Christie.

The baked bean sides ordered with a couple of our plates also benefited from spice, offset with brown-sugar sweetness, although the latter could be dialed back a pinch.

The sweet tea ($1) was Southern-delicious. But it was the only beverage Badd Newz offered this day. (Insert “Seinfeld”-inspired “tea Nazi” joke here.) While the slices of lemon and chocolate cake weren’t impressive in curb appeal – the former looked like a debauched Twinkie – they were both moist and flavorful.

Badd Newz serves its food in white Styrofoam to-go boxes. I would recommend calling in your order for pick-up, as there’s no seating and the truck’s generator operates at vision-blurring volume. But if you’re at or near A&M – or just feel like a sunny-day, 10-minute drive from downtown – Badd Newz’s spicy barbecue is right there waiting for you.