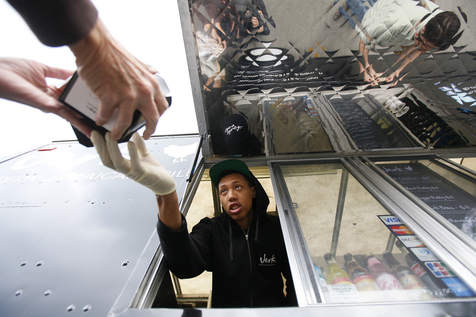 By Christine Bolaños  |  The Hutto News

Food trucks are all the craze in the Central Texas area with cities such as Georgetown, Pflugerville and Round Rock following in the footsteps of Austin, which has long embraced the mobile eatery culture.

The Hutto City Council, in a 5-to-2 vote on Thursday, approved allowing food trucks in addition to just trailers on a designated vendor lot slated to go into operation this summer in Old Town. The vote was taken on first reading and requires a second reading and final vote.

Councilmembers Paul Prince and Max V. Yeste took the opposing votes. The city’s proposal was a result of food vendors that expressed interest in operating out of food trucks.

While Hutto, like its neighboring cities, welcomes a food truck lot, it does not want the new venue to disrupt the city’s Historic Overlay District.

The ordinance would prohibit ordinary vehicles, vans and pick-up trucks from selling out of the food lot.

“Any motor vehicle that’s selling food shall be designed [for vending]. So not just having a beat up pick-up truck and someone calling it a food truck,” city planning director Will Guerin said.

He said the appearance standards would go hand in hand with the health and safety standards of the food vendor lot.

“It goes beyond healthy and safety but making sure properties are neat and tidy,” Guerin added.

“A truck could be more appropriate for some food items and a trailer would not be necessarily…it’s my opinion overkill on what they might need,” Holland said. Prince said he did not want to add food trucks to the food vendor lot because it would require public area cleanup and maintenance—all things that would come at a cost.

“The ones I see aren’t necessarily the most attractive [food vendor lots] and they generally lean more toward construction areas and things like that. And I understand that there are some that could look nice but keep in mind that’s not necessarily the market they’re going to be looking for,” Prince said.

“Those individuals need a lot of people. An area like downtown Austin where it makes a lot more sense to be mobile because then you can move around and things like that. Here, they’re going to be here maybe there’s not necessarily the most opportunity for commercial activity That’s just not how I envisioned that area at all.”

Yeste said he was unsure of whether having food trailers would bring “foot traffic” (business) though in time it could.

“There are very few people there, ever. And it’s not necessarily the location of it. They have some other issues there. I’m thinking if they’re struggling to get people there. I just don’t see how this isn’t necessarily a thing we should be focusing on,” Prince said.

“And what a difference it makes,” she said, adding that Pflugerville is promoting their food vendor lot “like crazy.”

Prince asked his fellow council members if they would interested in postponing action on the item until they could see the lease agreement but others, such as councilmember Anne Cano, felt they have waited long enough.

“I say we make a move on it and let the market decide,” she said.

Mayor Pro Tem Ronnie Quintanilla-Perez said the food vendor lot could act as a business incubator for the city similar to how it has worked in Houston, which was the city’s original intention.

“I think we’re trying to limit something that we hear we need more of and we did in the beginning think of this as an incubator. The new Torchy’s Tacos in Round Rock is a prime example but that’s one business out of all the food trucks and trailers that are in Round Rock. I think that’s kind of unrealistic for us to think that that would be the springboard for all these people. It’s offering another avenue for citizens and people that are really literally just driving through town. The place that we’re talking about would be visible,” she said.

Prince said he did not imagine passersby stopping in Hutto for mobile food versus an actual restaurant. Rios said that in case passersby did want to try mobile food they would have that option.

Hutto attorney Charlie Crossfield referred to Round Rock’s food truck vendor lot as a “mistake” and said the city may be ready to pull the plug on it. He told councilmembers if they don’t like the food vendor lot, they could always go back and amend the ordinance to get rid of it.

After the deliberation, the council took the 5-to-2 vote. The lot would be located near Farley Street and adjacent to The Co-Op.