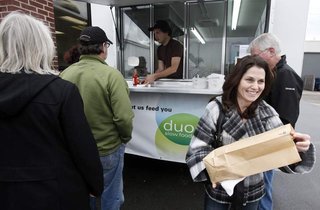 Our subject this week is Duos, a mobile concept in the new tradition of food trucks with a pedigree going back to the 1990s downtown vegetarian hotspot Essential Edibles. After said eatery met its demise in 1997, husband-and-wife founders David and Becky Hostetter went into a long period of mourning, with no desire to start another business. But the restaurant bug returned a couple of years ago when Becky began considering going mobile, which had significantly lower entry costs and afforded more control over the eatery’s fate.

“We’re able to make whatever we want, when we want, and go out when we want,” said Becky, 56, the culinary mind behind both Essential Edibles and Duos.

“It’s such a great idea to have food that people want and to sell it directly to them, instead of having a restaurant,” said 60-year-old David, who also has worked for St. Elmo Steak House, primarily as a server, for more than two decades. “The costs are less. Just the romanticism of selling food and having people come up to you on the street and buy it is really cool.”

Duos got off the ground without the weight of significant debt, as the Hostetters used their savings to buy a $30,000 custom-made trailer outfitted with a full operating kitchen. They also socked away $30,000 for start-up expenses.

One obvious expense would be renting kitchen space. Marion County health regulations require mobile food vendors to perform the majority of their food preparation in an approved and licensed stationary kitchen. (The truck or trailer also must meet health code requirements.) The Hostetters enlisted the shared-use facility Indy’s Kitchen at 2442 Central Ave. Its kitchen-use rates range from $14 to $24 per hour, depending on total time per month and peak or off-peak usage.

The Hostetters settled on offering a lunch-time menu that changed every week, with both meat and vegetarian options. The emphasis would be on seasonally appropriate grub, with ingredients from local farms and other vendors, when possible.

“Food cost is a particular issue for us,” Becky said. “You have to keep a particular price point, but I’m also trying to use as much local product as possible, and sometimes those two don’t speak together well. Local organic produce is expensive.”

The Hostetters invited local chef and former Essential Edibles employee John Garnier to become a third owner, with a sweat-equity contribution. They first hit the streets in December, which provided a rude introduction to outdoor vending.

“We went out maybe once a week in December, just getting the feel of it,” David said. “It snowed a lot. Our first big gig in early January was a First Friday event. It was 8 degrees out. The water froze. It was horrible. But we had lines of people coming to our food, so we knew the demand was there.

“It just took us to May before the weather cooperated with us, for us to go out and be successful. We’ve seen really steady progress through this year and think we will until the end of the year.”

The Duos trailer has developed a regular rotation of lunch-time sites during the week, including the Wishard Hospital Farmer’s Market on Tuesdays, the intersection of Vermont and Alabama streets on Wednesdays, and White River State Park on Thursdays.

The owners hope to hem to a strategy of controlled growth. Gross sales have increased from $3,262 in January to $14,724 in June, with $10,000 per month currently being the break-even point.

“We’re making a little bit of money now,” David said, noting that new expenses await, including about $20,000 for a used truck to pull the trailer. (It currently is being towed by Garnier’s overtaxed 1995 Chevrolet Suburban.)

Duos also employs a third chef, as well as a part-time kitchen staffer for food prep. David Hostetter said he hoped to bring on four more employees by year’s end, which would allow the trailer to add a second daily shift. “We’d like to be out twice a day by next year, and Becky and John can’t be everywhere all the time,” he said.

In the video at top, the Hostetters describe their entry back into the restaurant game, developing the Duos concept and trailer, lessons learned from Essential Edibles, and their plans for slow and steady growth.