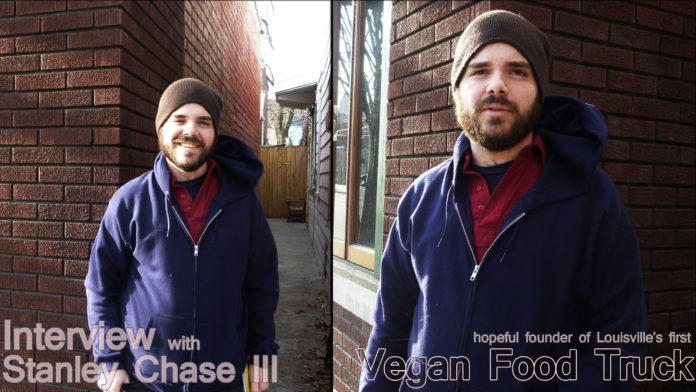 by Samuel J. Hartman | The Nail That Sticks Up

My title is a bit misleading…this  hasn’t happened quite yet. But it will! And not a moment too soon. About two months ago, a go-getting gentleman by the name of Stanley Chase III started a project on Kickstarter.com to launch Louisville’s first vegan food truck (Morels Vegan Food Truck). What, exactly, is that? It’s simple: a mobile, versatile truck, armed to fry, cook, and prepare delicious vegan food, traveling all over Louisville, serving delicious vegan food to anyone near by. The truck heads to a spot, posts up, and serves through the window, much like the famed ice cream trucks we all ran after as kids.

Why is this so exceeding cool, then? For starters, the food is 100% vegan – this is gentle activism in its purest form. Because of the novelty and exciting nature of a food truck, customers will flock, and suddenly discover, “whoa, this vegan food is actually pretty good.” Is the food going to be good? Yes. I can say this with confidence after returning from a food tasting last week where Stanley prepared BBQ seitan wings, mock chicken salad, and Vietnamese-style Banh Mi hot dogs. It was absolutely delicious! He has a strong desire to source his food locally, and help with spreading the word about pet adoptions and other local pro-veg ideals. This is the real deal.

Stanley and I sat down last week to talk for a bit about the project, and his kind, quirky attitude won me over. Read on:

TNTSU: My girlfriend had sent me a link to the Kickstarter page, that she had found some through someone, who found it through someone, and so on – and this was like a day after the launch – now it’s blown up: in the Leo, you’re gonna be on TV…

Stanley: It’s all been through word of mouth. I’ve met a few people that have found the flyers that I’ve put around town, but everything else has just been online. From Facebook, to the Leo, to the Courier, to the woman that I met who does the PR company – it’s all friend of a friend of a friend.

Where did you come with the Vietnamese dish, the Banh Mi hot dogs?

I was working at this vegan restaurant in Philly, and they did these Vietnamese tacos that were basically tempeh, slaw, the sauce – everything rolled up and then sliced in half. It was killer. So my version is just like a regular hot dog, and it has the Banh Mi slaw on top of it with some Sriracha [vegan] mayonnaise on the side. It’s one of the most surprising things to eat.

You’re making your own seitan, right?

Yeah – from flour, not even from vital wheat gluten. It’s one cup water, one cup flour, and then I just knead it. It makes a mess real quick, but sometimes I just put in my KitchenAid and just let it mix for 20 or 30 minutes. Once it’s done kneading you let it soak in water for ten minutes. The most important thing is the water temperature. If it’s  cold water makes it’s gonna constrict; if it’s hot water it’s gonna separate which is what you want at first. You want it to get stringy so layers get created inside – that’s what gives you that tear, [making it] more meat like, rather than it breaking apart like rubber. Because the cold is gonna restrict it and make it more chewy.

What happens after it sits in that water?

You pull it [the dough] out; put it in pretty hot water and just press, and press, and press. And all the starch comes out of it, and the water turns into [something like] milk.

What you’re doing is you’re rinsing out everything that isn’t [protein]. When it gets to the end, there’s just that ball of gluten. It’s cheaper to do it [this way], and the taste and texture…there’s just a very distinct flavor.

The preparation will certainly take some work, especially for the truck with all the health code policies and such.

Food trucks have a notoriety about them, you know, roach coaches – you don’t want anything on you like that. I’m really just a clean freak anyway, and it’s gonna be the same way with the truck. I like seeing things that are clean, and I want everyone to know that the food is coming from a healthy, safe place. Everything is gonna be fresh.

Is there an element of advocacy that you forsee with the truck?

When I was younger, I would just get into arguments with people at the bar just because I felt like I had to. Now, I tell people when we go out to eat I’m allergic to meat. It doesn’t always turn into something positive unless they’re approaching me, and then I love engaging them in a conversation like that.

What I really want for this truck is for it to be a cuisine: vegan cuisine. Meat eater or not, I want people to be able to come to this truck and know that they’re gonna get something vegan and fresh. Just doing something and saying “hey, this is vegan” is more of an outreach than punching it down someone’s throat and saying “this is what I think you should be doing.” It’s a more healthy approach, as far as pushing a belief or an issue. It’s always worked out better for me because I’m not really into confrontation.

Pretty neat, right? I urge you to watch Stanley’s take on things in his short video on the Kickstarter page. He’s close to reaching his goal of $12,000 to fund this incredible project, and I would like to ask all my readers to pledge something, even if $1!, to this worthy endeavor. Vegan food is awesome for so many reasons, and this guy want to share it with all of Louisville.