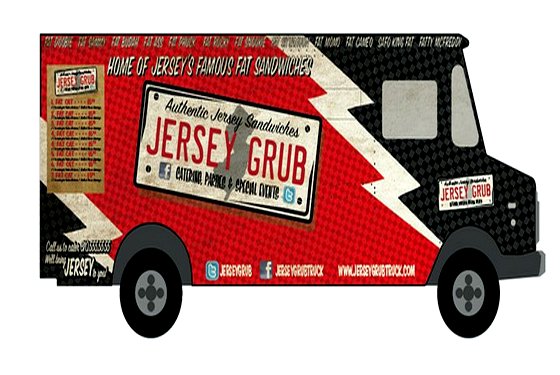 It’s a new year, but last year’s big trucking trend is still yet to completely stall. Following such New York transplants as Scott Conant, Cafe Habana, Eveleigh, and Richard Sandoval, Jersey Grub plans its launch this weekend, the latest in the realm of East Coast-leaning food trucks. While we await a turf war hopefully breaking out among such forebears as the swaggering NY Ice Connection and longer-standing South Philly Experience, what does Jersey Grub want to fatten you up with?

The good news is that, so far, there’s not a Snooki in sight. With a dusty Garden State license plate motif and lighting bolt logo, the truck gives us more of a Thunder Road vibe. So far, not so bad. The key output here is Jersey-style sandwiches, though given our past experience with food trucks, there’s darkness on the edge of our hopes that it could be as good as Atlantic City’s White House Subs. The truck comes from a real East Coast transplant and his “Jersey girl,” who relocated to Hollywood recently, and takes inspiration from “grease trucks,” which serve sandwiches to the hungry mouths at Rutger’s University.

The menu is online and features a host of sandwiches with the word “Fat” at the beginning (eh, you talkin’ to us?). There’s a “fat cat” double cheeseburger, a fat “Prop 19” that name-checks our fat chance proposal for legal ganja, and a “fat bulls” that combines chicken fingers, egg, and pork, along with a side of fries, which probably should have been named the Prop. 19 because only one hella stoned individual would desire such a beast. A corner-stone could be its “fat poser” with chicken fingers, that is so-named as it sorta kinda rips off the “Fat Darrell” (a famous “Dirty Jersey” sandwich that got nods from Maxim). There are also daily specials and sides like well, more chicken fingers and mozzarella sticks.

Speaking of monstrous appetites and unhealthy sandwiches, a Facebook page offers diners the chance to name their own sandwich IF they can eat five sandwiches in under 45 minutes. And suddenly, the truck’s aims become clear: these East Coast invaders are trying to kill off the natives!

Defend yourself for the debut this weekend by keeping your eyes on Jersey Grub’s Twitter.