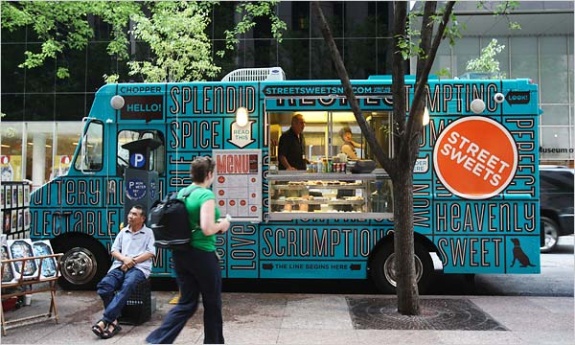 If you are a working person, especially in a city, than the odds are high that you have eaten at a food truck in the last few months. Who knew eating food out of a truck would ever be so popular? The last time people out food out of trucks was when they were stealing stuff during the Great Depression. Can you imagine if they knew this was now a cuisine trend? Food trucks blend people’s favorite things: delicious and unique food, social media and feeling like you are in on something new. Plus, they are during breaks from work so what is not to like. As the LA Times said:

“The truck and its staff of merry makers have become a sort of roving party, bringing people to neighborhoods they might not normally go to, and allowing for interactions with strangers they might not otherwise talk to.”

But who are these people that are operating these restaurants on wheels? It seems like lately the new thing to do is quit your boring desk job and get out on the road in a truck and sell food. This is definitely being reflected in pop culture. On the show Happy Endings, the character of Dave leaves his zombie sales job to start the truck Steak Me Home Tonight and in  Think Like a Man, Michael Eely’s Dominic saves himself from a crushing breakup and wins back the girl of his dreams by starting his own food truck. In The Five-Year Engagement Jason Segel’s Tom Solomon buys an ambulance and turns it into a paramedic-themed taco truck. We haven’t seen too many ladies do this on television but that doesn’t mean they aren’t doing it in real life. We talked to some people who quit their jobs to start a food truck business.

“Prior to launching Deano’s in August 2011, I held a Marketing Director position at a food package design firm based in Los Angeles. My clients consisted of entrepreneurs launching retail food products into the world. Each day I thought, ”Hey, I can do that…”, and then one day I did.

A little bit about Deano’s Deli – an east coast style deli sandwich truck serving made to order hoagies, fresh cut potato chips, gourmet salads and vintage soda pop. The concept was born after I suffered a family tragedy and realized that life is too short to be working towards someone else’s dream. Deano’s has been roaming the streets of Los Angeles for 10 months, and the business is thriving! It’s a very exciting time for me, as a 28 year old whose life was thrown into a blender and created an amazing story.”

“Culinary credentials, or even experience, are no longer a prerequisite for success in the culinary world. More and more of these dissatisfied professionals are skipping the usual steps and reaping quick rewards. In just a couple of years since he quit his job in financial services, Luke Holden has opened three branches of his popular lobster roll shack, Luke’s Lobster. Ex-lawyers driving cupcake trucks have popped up in New York,Philadelphia and Washington, D.C. (There’s also a Butch Bakery owned by a proudly self-identified “former asset backed securities attorney for a major Wall Street law firm,” that specializes in “bringing a totally unprecedented culinary product to market” — the “manly” cupcake.) The Peached Tortilla in Austin, Texas, is run by yet another disillusioned lawyer. The list goes on and on.

You don’t need culinary credentials to start a cupcake truck, and a cupcake truck, with the right paint scheme and Twittercisms, can now be enormously, quickly profitable — much more so than starting as a line cook fresh out of culinary school.”

But it is not like top chefs aren’t going mobile as well. Robyn Almodovar, who is now on Fox’s Hell’s Kitchen (which premiered last night) started the first female-owned food truck in South Florida called Palate Party. She quit her job at one of Miami’s biggest restaurants to start her food truck which features a custom built stage on top for live entertainment.  She told The Miami Herald, “We basically go anywhere. We bring the party to you.” Almodovar is a former nursing and cosmetology student. “I realized the passion was in my hands once I saw those late night [Le]Cordon Bleu infomercials. They sucked me in.”

But if you think quitting your job and  starting a food truck is as easy as they make it look on a TV show or romcom, you are quite wrong. Though it is much cheaper to start a food truck (OpenForum estimates it to be around $30,000 while depending on a city and space, brick and mortar spots start around $125,000) it is still a tough business. Lauren Drew Daniels wrote in her column Chewing The Fat: “Daily expenses just to keep things moving rack up quickly, like gas, mechanical repairs for both the truck and equipment, weather (you lose money when it rains) and fees for permits and parking. Then, there are the long hours and tiring work in small, tight, often hot spaces.”

Miley Holmes, who runs the Easy Slider food truck, told Daniels, “First and foremost, anyone who thinks that running a food truck will lead to riches is fooling themselves! The biggest misconception about this business is that it’s a way to get rich quick. Margins are tight, space is limited and the market is unpredictable. So, the reality is that you are never going to make a fortune from running a food truck.” The days are long, physically tiring and you never really get a vacation if you want to make profits.

Basically it sounds you like are an entrepreneur at a startup except there is more food and your office is mobile.If food is your passion and you think you have the energy for this project then go for it, but by no means should you think that this will be an easy job.