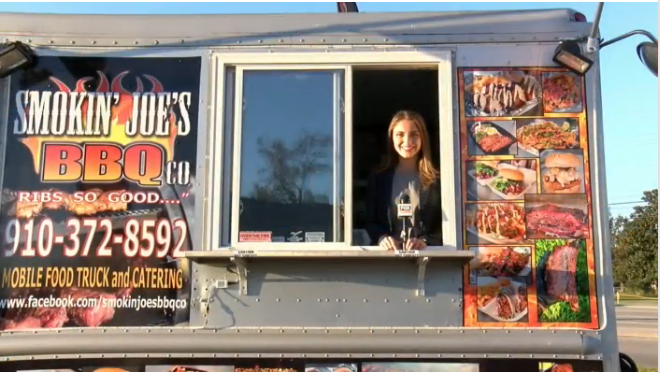 JACKSONVILLE, Onslow County — Food truck vendors in one area of eastern North Carolina are hoping for change. They’ve put a proposal in front of city leaders, asking to be able to park and sell their food in city limits at all times and not just for city-sanctioned events.

The owner of Smokin’ Joes BBQ Company was born and raised in Jacksonville and he said he wants nothing more than to serve his local community, to cut back on drive time, and avoid unnecessary wear and tear on the truck.

“Back in the end of March our food truck was in an accident,” said Joseph Lesewski.

He said he was driving back from Wilmington, where they can freely park their truck and serve customers.

“We, unfortunately, we had a blowout. We lost one of our tires on the driver side and we wound up laying our truck down on the ground on the side of the road,” he explained.

After that accident, Lesewski and his team talked about how beneficial it would be to serve closer.

“Without us being in city limits we’ve had to go elsewhere,” he said, “We’ve had to go out of town. Which is more gas and more stress on our vehicles and more miles on them and we just want to stay local and provide for the community here.”

City officials were asked why food truck vendors aren’t already able to do this.

“That’s a good question,” said Ryan King, Director of Planning and Inspections, “I’m not sure the rhyme or reason when the ordinance was created back in 2014. I’m not sure there was a demand for it back then.”

King says hot dog stands are allowed in city limits because they can fit under an overhang or canopy; that’s a rule in the current ordinance

“The newer technology, the bigger trucks and vehicles, they can’t fit.”

City officials are reviewing the proposal and trying to find a good balance between food trucks and brick and mortar restaurants.

Lesewski said they pay vehicle property taxes and commissary taxes to the city so they just want to be able to serve their bbq there.

“We want to do office parks, hospitals, lawyers offices, we want to go downtown right there at the courthouse and set up,” he said, “Anywhere in the community to help these people out. It cuts their lunch breaks in half and saves time for people.”

Right now city council members are looking at the proposal and seeing how other municipalities deal with this application process and they hope to have an answer for food truck vendors in the beginning of 2021.