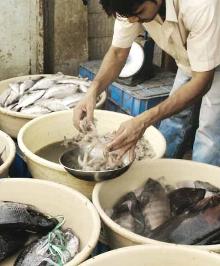 JEDDAH – Some expatriates sell dangerous food in popular alleyways in Jeddah. Whether they sell chicken, fish, or meat, people flock to buy it. Some people said the Jeddah Mayoralty’s inspectors have not visited these places, though officials claim otherwise.

Experts warned against eating the food available here and called upon authorities to take immediate action.  Okaz/Saudi Gazette visited the Al-Borma District, a popular part of downtown Jeddah, and talked to some consumers.  Khalid Qayed Al-Harbi, who was in the area, said he doesn’t trust the vendors because he has a number of concerns.

“It’s easy to sell rotten meat as good meat because people can’t tell the difference,” he said. “I don’t trust these sellers and I don’t buy this meat because I don’t know where they get it and whether it’s safe or not. Added to this, these sellers might have a contagious disease or something. They don’t even have health certificates, a violation that makes the problem more complicated and dangerous.”

Ahmad Musa Hayash, another visitor to the popular location, called on authorities to take action.

“Meat, poultry and fish stores in these places should be monitored,” he said. “I prefer to buy a sheep from the sheep market to make sure it’s safe.”

Misaad Al-Shehri, who was also in the area, said the Jeddah Mayoralty bears some responsibility for the situation because it has failed to crack down on these sellers, whose number has increased dramatically.

“Consumers should ensure that meat is safe before buying it because meat is a rich environment for bacteria and contamination,” he said. “They should also go to a licensed slaughterhouse if they want to slaughter a sheep. Only veterinarians know whether a sheep is sick or not.”

Ola Sadiq, a nutritionist at a private hospital in Jeddah, warned against exposing meat to sunlight or keeping it in the heat inside a car for a long period because it goes bad in no time.

Dr. Mahmoud Al-Sayed, a veterinarian, said there are a number of ways people can get ill from eating roten meat.

Dr. Al-Sayed also warned against consuming meat of sheep slaughtered outside slaughterhouses because it has not been tested.

Fadwa Al-Ghamdi, a nutrition specialist, said people should not buy meat from street vendors because it is prone to cause diarrhea, poisoning and tapeworms.
He called on officials to make sure that the merchants are selling safe meat and said those responsible for doing have been negligent.

“The mayoralty should ensure that all meat vendors comply with medical requirements such as having proper ventilation at their shops and wearing gloves when touching meat,” he said.

Inspectors made daily visits during Ramadan, uncovered violations and implemented penalties, the latest of which was the seizure of rotten meat, he said.

“The mayoralty has intensified its inspection visits to meat, poultry and fish stores during Ramadan,” he said. Frozen rotten fish and poultry were seized from some vendors and destroyed, he added.