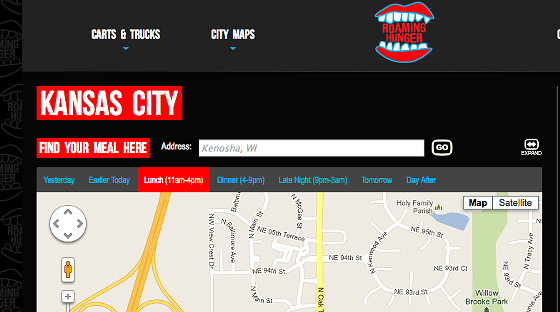 Kansas City’s food-truck scene has wheeled onto the national landscape. Roaming Hunger, a food-truck locator, launched in KC Wednesday. The site, which allows eaters to find the current locations of trucks as well as book them for catering or events (Roaming Hunger derives its revenue from bookings), represents the fulfillment of a pledge that founder Ross Resnick made to lead developer John Morgan Martin as he built the site in 2009.

“I made a promise to John, who is from Kansas City, that we could eventually make it out there,” Resnick says. “We look for cities where there is a collection of 25 to 30 food vendors. It just took a little longer than I expected.”

Roaming Hunger, which is based in Los Angeles, now has dedicated food pages for 33 cities. And each has its own food-truck culture.

In addition to the 25 carts listed on Roaming Hunger, Kansas City also has its own food-truck app.Truckily, a locally built app still in development from Derek Kean and Matthew Berkland, is expected to launch this spring.

“With the upcoming spring and summer weather, we are looking forward to busier schedules from our local favorite food trucks, and our app will be in full swing to help everyone in KC follow along,” Kean says. “This year is a great year for food trucks, and we hope to help locals find and eat more great food, saving both eaters and food-truck owners loads of time with our app’s automated marketing features.”

During a phone interview from Los Angeles, Resnick said he was aware of Truckily, but believed the app was more of a marketing tool for vendors rather than a direct competitor. And as he sees its, anything that helps foster food-cart culture in a city is helpful.

“Truckily looks like a really nice way for vendors to manage their profiles and get the word out,” Resnick says. “From our perspective, the more people paying attention to food trucks, the better.”

And if Roaming Hunger’s past launches are any indication, the food-truck scene in Kansas City could be poised to go into hyperdrive.

“As people learn about the food-truck scene, then more people become comfortable launching trucks,” Resnick says. “That’s what happened after we launched in Houston. Things started to really heat up. I’m looking forward to seeing what happens in Kansas City.”