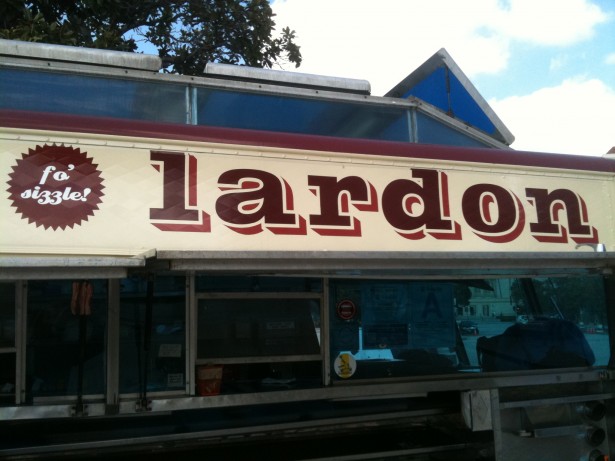 It is a truth universally acknowledged, that a hungry person* in possession of a few dollars, must be in want of bacon. Bacon, and the various other forms of pork belly both cured and uncured, are everywhere these days—especially, it seems, at ThisIsWhyYoureFat.com. And as with every other culinary trend, there’s an app—er, truck for that: the aptly named Lardon, where every item on the menu but one (sugar cookies) involves pork fat in some way.

Lots of tape on that menu.

Lardon took to the streets in the fall of 2010 (does that make them relative newcomers or total dinosaurs?). They’ve come to Altadena a number of times since then, usually up on Lake near the Coffee Gallery, a spot first carved out by Kogi. In anticipation of Sunday the 27th’s Junior League Community Expo at the Rose Bowl (featuring Border Grill, Nom Nom, Frysmith, Coolhaus, Lobsta Truck and the Boba Truck), they had been working on their Pasadena permits, which they received just in time, on Thursday the 24th. Spontaneously, they decided to do lunch in the City Hall area. Also spontaneously, I checked Foodtrucksmap.com/la (which now has a pretty nifty app) for lunch options. Bacon bourbon maple syrup? Bacon hot sauce? Bacon blue cheese dipping sauce? Bacon Nutella spread? What manner of person* could possibly resist so much… well, so much bacon?

Our expeditionary party found Lardon across the way from that Jackie and Mack Robinson Memorial, a few stragglers milling about in front, waiting for a late lunch. The first thing I noticed about Lardon, besides the truck itself, was that they set up short stools—a thoughtful touch, given how few of these vehicles set up shop anywhere near a bench.

The second thing I noticed was that the menu is significantly modified, mostly with the aid of masking tape, from what one sees online. For example, you can add avocado to just about anything for $1. Also, “the baco” is apparently a taco (and, the cashier informed us after no one ordered one, their signature dish). Between the rhyme and the description—“potatoes and cheddar in a bacon shell”—this should have been obvious, but went right over my head until I saw the word “TACO” taped to the menu. Also, they were out of many things, including the BLT with blue cheese, which I almost certainly would have ordered. Also, many things cost $1 more than on the web menu. They should probably update that.

After much deliberation, I settled on the frisee au lardon sandwich, with a fried egg and vinaigrette on toasted brioche, while my fellow bacon-eater ordered the brioche french toast sandwich filled with crumbled bacon and bacon bourbon maple syrup. As decadent as this sandwich already is, the Lardonites offered to dress it up even more, with peanut butter and Nutella (usually they also have bananas).

We raced back to the office, the smell of bacon settling over everything. I unwrapped my sandwich and found this beautiful object.

The french toast and bacon… sandwich?

And you can’t really eat it with your hands, unless you don’t mind getting syrup on everything you touch. I wish I could tell you how this tasted, but its possessor inhaled it, as if through his nose. Some people breathe bacon.

The frisee au lardon sandwich, on the other hand—that I can tell you about: an exquisitely toasted bun encasing a runny fried egg, sufficiently viscous, fresh frisee dressed in a robust, harmonious vinaigrette, and perfect little bits of pig fat. For the money, there could have been more lardons—or more of everything—but such is the world of fancy food trucks.

If I were a glutton, I would regret not ordering “the baco,” or the grilled cheese special with apples and some exotic form of bacon, or the breakfast burrito. If. Instead, I eagerly await Lardon’s return to Pasadena. I’m already deciding between the BLT and the chicken wings with bacon hot sauce—”the baco” goes without saying. Because there’s no such thing as too much bacon. Right?