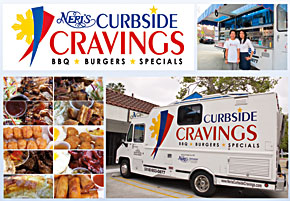 Since it first started rolling down the streets of LA last Jan 29, a Filipino food truck has been attracting hordes of loyal followers; surprisingly, many of them non-Filipinos. Neri’s Curbside Cravings is LA’s Latest Gourmet Food truck that has been getting excellent 5-star ratings from food critics. The long, long rows of customers who patiently stand in line to satisfy their cravings for the Curbside Craving’s delicious servings testify of its greatly appetizing and satisfying meals.

The people behind Neri’s Curbside Cravings are Neri and Romy Seneres, owners of Neri’s Restaurant (along 6th St and Occidental Blvd. in Los Angeles), and their two nieces—Rhea Rachelle Espino and Maria Belzunce—as their business partners.

With palabok as its specialty, Neri’s Restaurant was started in 1985 by Neri and Romy, both accountants by profession. For the past 26 years, Neri’s Restaurant has become well-known for its puto, kutsinta and other native snacks and delicacies. Its varied clientele has been coming back for its chicken and pork BBQ, kare-kare, baked halibut and, most recently, its latest big hit—their original “Crispy Dinuguan.” Neri’s great food at great prices, plus top-rate service, has made their restaurant one of the most sought-after caterers in town. In fact, it’s been said that Manny Pacquaio gets his sisig from Neri’s when he’s in LA.

Neri’s niece, Rhea Rachelle Espino, is a well-rounded business entrepreneur who has an extensive knowledge and experience in the restaurant industry, having owned Café Rodin at the Westside, Wok Inn in Glendale and Lutong Bahay in Eagle Rock. Though she is a great finance asset manager, running a food-related business is her first and foremost passion. Rhea Rachelle took up hotel and restaurant management at the University of Santo Tomas and is in charge of the day-to-day operations of Neri’s Curbside Cravings.

a certified chef by profession. After her internship with Urban Green Cuisine, she worked with Wolfgang Puck’s Catering Company where she had the opportunity to experience catering for high-brow events like the Oscars, Grammy’s, Teen Choice Awards, as well as private parties hosted by Coco Chanel, Juicy Couture, etc. and movie premieres for Angelina Jolie’s Salt and the blockbuster Harry Potter.

“Curbside Cravings is a three-generation truck as I call it, because of the ages of the people behind it- my Aunt Neri (65), myself (42), and Maria (21). This makes our Gourmet food truck very interesting. The 3 different generations of the players behind it allows a crossover of the culinary boundaries of a fusion Filipino food and a traditional classic dish,” Rhea told the Asian Journal.

“In a short period of 3 months, our Gourmet Food Truck has been recognized not only by our fellow Filipinos but by other nationalities in every major event that we have attended,” said Rhea.

Some of the events Curbside Cravings has participated in are the Truck Festival at Union Station, which happens every first Sunday of the month throughout the summer; the first Chino Food Truck Festival in San Bernardino County; and the Rosebowl Walk for Life in Pasadena.

Curbside’s Tocino Burger has been the most popular among the foodies (term used for foodtruck lovers) and bloggers.

Asked what makes their burgers different, Rhea shared, “We make our own pandesal bread which is as big as a hamburger bun. The patties are different from the usual hamburger patties. We give a choice of Teriyaki Burger, Tapa Burger, and Tocino Burger, all well-marinated and topped with tomato, cilantro and egg. Then we made a mango, bellpepper slaw to give it a crunch and spread Aoili on the warm pandesal bread.”

Aside from the unique gourmet burgers, the traditional classic breakfast dishes served all-day are equally popular—Tapsilog, Tocilog, Longsilog, Daing Balls and Belly Strips. They also have on their menu the best-selling Crispy Lechon Kawali and Crispy Dinuguan (“We’re the first and only one to serve this in Los Angeles,” stressed Rhea.)

“We also have a large selection of BBQ dishes which is served with steamed rice and a refreshing side salad. Our Lobster Balls and Empanadas are instant hits as well. And in different occasions, we come up with different dishes that we offer as specials in our Gourmet Truck. With our restaurant having been in existence for 26 years, this allows our Food Truck to be different and creative allowing us to bring a great selection of food on the street, Curbside,” said Rhea.

Curbside Cravings boasts of many firsts: the First Filipino Restaurant in LA to have a food truck, the first and only food truck serving original and gourmet Filipino fusion dishes, and soon to be the very first food truck to have a QR Code with an application built and ran by www.daqri.com. Rhea explains what this is, “It is a virtual and augmented reality which allows the user to see pictures, menu, know our location, and call us – using a touch of a button using their smart phones or iPad2 after they take a picture of this QR Code attached to our truck which looks like a thumbprint. It’s pretty exciting, huh,for the younger generation!”

As more and more people take on the challenge of the owners of Curbside Cravings to “Feel the Curbside Experience…Taste it once and crave for more ”, Neri, Rhea and Maria should probably get more trucks soon to satisfy the cravings of the ever-hungry LA foodies.

Here are just a few samples of the 5-star reviews from non-Filipino food critics on Yelp:

“When I finally got my order (Tocino Burger), it was well worth the wait. I was very happy with my order to say the least…Overall, with all the different food trucks around these days…it all boils down to the food. Neri’s Curbside Cravings definitely has that covered. Good food, good value, and friendly owners/employees are a good combination for a successful food truck in a very saturated food truck business….keep it up Neri’s Curbside Cravings! Hope to see you again soon =)” – Chris C. Walnut CA

“I think I’m curb stomping after eating at the Curbside cravings truck. This truck brings Filipino fusion food to the streets and my goodness, the cravings have set in after eating it. The tocino burger won me over so much… I have to say that the lobster balls served here beat everything that can be found on Lobsta’s menu with its claws tied behind its back.

Not only is the food really good, but it’s also really cheap for what you’re getting. The burger itself was no more than 6 or 7 bucks and that got you a lot. Even though I was already full, it was so good that I pushed on cause I wanted to leave nothing behind.

Service at the truck was really friendly and fairly quick. Over all, this is a truck that I will be more than happy to eat as soon as I see it again.” – Javier J.

“The Tocino Burger at Curbside Cravings was the best food at the entire event! We wandered around and tried food from maybe 6 or so different trucks, and this one wins, no contest. Basically, try this at some point in your life – you won’t regret it. I only wish it was easier to figure out their normal open hours! I’d be here all the time!” – Jacek W.

“I got to eat their food at a Chino Hills Festival about three weeks ago with my friend and we stuffed ourselves to the MAX. Everything we ordered was phenomenal.“ – Diana H., Baldwin Park, CA