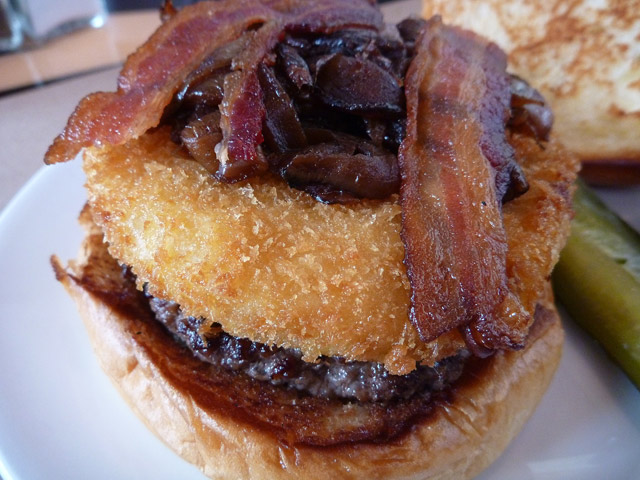 In the mood for a burger and a spiked milkshake in the heart of Hollywood? Go to Go Burger. The folks at New York-based BLT have had such success with their food truck (called Go Burger) that they’ve opened brick-and-mortar restaurants. It’s happening more and more; the food truck craze is resulting in restaurants (like The Alibi which was born from the Kogi truck) being built due to the popularity of the trucks. By the way, if you ever find yourself at BLT you have to order the Braised Short Ribs. You’ll cry tears of joy. You’re welcome.

As luck would have it, and much to the dismay of my arteries, I’ve found myself at Go Burger three times in the past week. The first thing worth mentioning is that the place is very, very clean. Oftentimes, some of the best burgers are served in, um, grittier restaurants. And I’ve eaten in some gritty eateries in my lifetime. No worries here, though.

There are a couple of especially noteworthy burgers. One is the Smashed Burger. It is cooked on the grill with onions hand-smashed into the patty while it cooks. If you want to “Make it a Philly” – which I did – they’ll add peppers, pickled jalapenos, and melted provolone cheese. It’s definitely a tasty, well-seasoned burger. And the pickled jalapenos provide a nice snap of heat tempered by the pickling of the peppers. The other standout is the Lambo Leap. It is a secret menu item and you’ll have to ask for it. It is your basic burger that comes with an additional “patty” of macaroni & cheese. At first glance, it looks like a crab cake has been added to the burger, but cut the burger in half before eating and the mac & cheese slowly pours out onto the patty.

Since you’ve just ordered a secret item, add another: the “Big Momma.” It’s a shake so secret that the server didn’t know about it on one of my visits but, more importantly, the bartender did. Chocolate syrup, chocolate ice cream, whipped cream and Maker’s Mark come together in a shake that goes down way too easily. Have a couple of these and go one block over to the Arclight and catch a movie.

The Duck Fat Fries are hit-and-miss. On one of my visits, they seemed tasty, although not as crispy as you’d think for what are essentially French fries en confit. The next time, they were meh. The Waffle Fries are nice. And the Vidalia Onion Rings are great with a nice snap to them.

The Prime Steakhouse Burger is too pricey at $18. It’s good meat, but it’s a bit like using top shelf liquor in a blended fruity cocktail – a marginal, if at all noticeable improvement that’s not worth the extra coin. They also lose a few points for listing the Orange Pisco Sour as their number one House Cocktail and then realizing they were out of Pisco. The menu offers three “Prepared Beers.” These sounded strange enough to have to try. The Honey Bear (Kelso Pilsner, Clover Honey Syrup and Fresh Lemon) was disappointing since the combination seemed to bring out the harshest qualities of each of the ingredients. Have a regular beer or, better, stick with the spiked milkshakes.

Some will reel at the prices, starting at $9 for a cheese-less, basic burger and topping out at the aforementioned $18 Steakhouse Burger; particularly when adding a spiked milkshake and Duck Fat Fries adds another $17. But Go Burger is definitely worth a visit…especially if you’re a fan of Maker’s Mark.