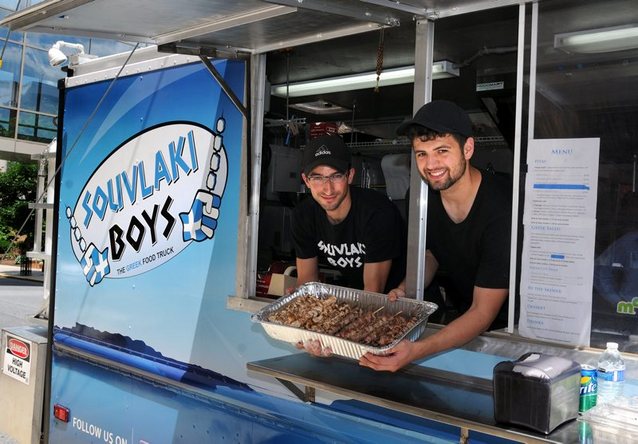 Grilling season is in full swing, so why not grill Greek-style?

You can do that with this souvlaki skewers recipe which comes courtesy of Pete Alexopoulos and Michael Kambouroglos, two 25-year-old cousins better known as the Souvlaki Boys. Their distinctive blue-and-white food truck has been seen all over the place since the guys went into business last August.

Were you at Lancaster Catholic High School’s big carnival this past week? The Souvlaki Boys were there. Did you pop by the Second Sunday Flavor Fair at downtown’s Building Character a couple of weeks ago? That truck was there, too. Were you a hungry employee of Lancaster General Hospital who grabbed something good for lunch on a recent Friday? The guys were parked right on Duke Street.

The Souvlaki Boys are doing good business, and they have a lot of experience to back up their culinary skills.

“My dad had a couple of restaurants,” says Alexopoulos, a 2006 graduate of Manheim Township and a 2010 graduate of Penn State. Those restaurants were the Doughboy in Leola and Speed’s on East King Street.

“I grew up in the business,” Alexopoulos notes with pride.

Kambouroglos is a 2006 Hempfield graduate who went on to obtain a degree in culinary arts and restaurant management from the famous Culinary Institute of the Arts in Hyde Park, N.Y. His mother, Nancy, ran the Sun Restaurant, a beloved Lancaster landmark which was in business from the 1930s and closed 10 years ago this year. 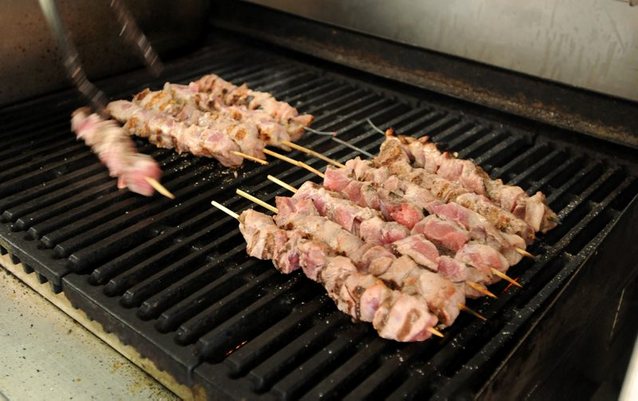 “You grow up Greek, you grow up with food around,” sums up Kambouroglos. “One thing Greeks know how to do is hospitality!”

This recipe for Pork Souvlaki Skewers is, indeed, perfect for hospitality, summer-style. It’s grilled, it’s Greek and it’s accented with the flavors of lemon and oregano. Take note that while it’s easy to make, there are some tricky aspects to making it, such as adding the oregano at the last minute, as oregano burns quickly. Otherwise, it’s a recipe that comes with a lot of family heritage, passed on by way of the Souvlaki Boys.

Put approximately 1/4 pound of meat on each skewer, spreading the meat over as much of the skewer as possible without leaving space between pieces.

Put vegetable oil on paper towel and rub down grill grates. When oil smokes, the grill is hot enough. Season the meat generously with salt and moderately with pepper.

If using a gas grill, turn half of the burners to medium, or if using charcoal, move the majority of the coals to one side.

Place the skewers over the high heat. Allow first side to sear to a crisp before turning and repeating. Turn the skewers and cook over high heat until all sides have been browned. Move over medium heat and continue cooking until meat reaches desired doneness.

Just before removing from grill, spray skewers generously with lemon juice, sprinkle oregano on top and finish with some salt. (If oregano is added during cooking, it will burn and impart bitter flavors to the meat)