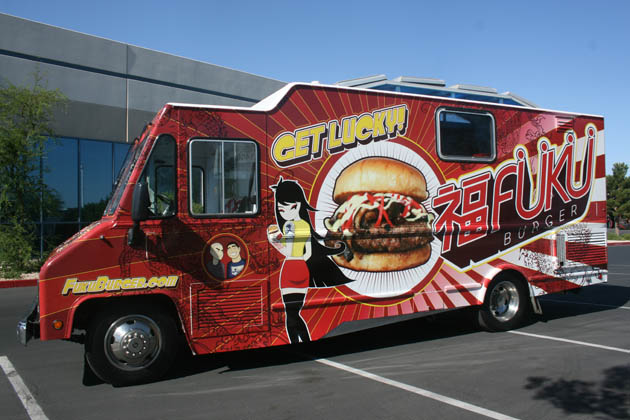 LAS VEGAS — They roll down streets, find a good parking spot and bring amazing tastes in an environment unlike any other. Food trucks have exploded in popularity throughout the Las Vegas valley, but that has also brought added scrutiny and some potentially questionable practices.

Food trucks are a perfect concept to create high-end cuisine with budget prices. In every single inspection report from trucks in the valley, all got and A letter grade during recent inspections. But that doesn’t mean all the rules are being followed.

Colin Fukunaga’s Fukuburger was one of the first trucks to pull up to the scene. Many locals see the trucks as the beginning of a true Downtown Las Vegas revitalization, pushing art, local music and food when big box chains dominate.

One way is with guaranteed quality. Fukuburger is one of the cleanest trucks in the city, with an A health rating with only a minor demerit. Fukunaga says all the trucks need to follow the rules or it hurts everyone.

“You need to dump your grease and your biohazards in specific areas so that it doesn’t go into Lake Mead — it doesn’t hit the city streets,” he said.

But that isn’t always happening. Southern Nevada Health District rules require trucks to come to commissaries for storage and waste disposal. Sources say many of the trucks are not parking the trucks or dumping correctly and it is unknown where the waste goes.

“We have caught them in the field where we can substantiate their claim that they’re not using the commissary. They’re issued a closure,” said Jonathan Dalton with SNHD.

Dalton has quickly had to become the valley’s food truck expert. The county is currently working on a tracking system to make sure each of the trucks are in compliance with a log sheet, which is critical to oversight.

“They’re enclosing an entire restaurant pretty much inside one smaller box,” said Dalton.

Those small boxes get scorching in the summer and chilly in the winter. Food can’t be exposed to the elements because of temperature contamination.

“We’ve seen pilot lights get blown out, so we need to be constantly monitoring those food temperatures to make sure the stream tray isn’t just running idle and cooling off,” said Dalton.

The same rules for food handling apply to the new meals on wheels, with the health district emphasizing hand washing, and the overall hygiene of the food handler.

While at a recent food fest, an inspector hopped from truck to truck, making sure everything was up to standards. A 100 degree night doesn’t change the rules, but is part of consistent follow up after the initial inspection.

“We know their equipment is safe, but are their food handling practices consistent with that?” said Dalton.

Fukunaga says it’s about transparency, fighting the old “roach coach” image and having hopes of creating a community.

“Sometimes it’s good to bump elbows with somebody, and it feels good to have that human exposure,” said Fukunaga.

This week, the Las Vegas City Council offered to extend a 30 minute parking rule for special events as part of a push to unify all truck regulations county-wide. That should happen over the next few months.