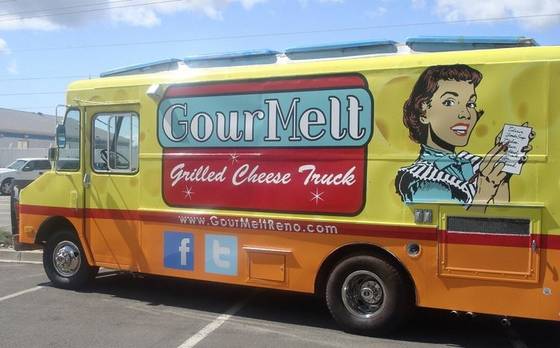 But when they couldn’t secure a loan large enough to fund a restaurant venture, they instead decided to open a restaurant on wheels.

Wood and Watnes began serving sandwiches from the GourMelt Grilled Cheese Truck on May 1, and business has been booming for the two fledgling entrepreneurs.

The business owned by Wood, 33, and Watnes, 25, has been profitable in its first two months, and sales have grown steadily through strong social media campaigns on Facebook and Twitter, as well as word of mouth.

The learning curve has been steep, however, from finding vendors to purchasing and upgrading their catering truck to finding a place to park and serve sandwiches. The team was chased off city streets and now relies upon businesses throughout the Truckee Meadows to allow them to park in their lots. It’s a plan that’s working well: The truck is booked through mid-August through business requests. A schedule of the truck’s location is posted on the company’s Facebook page.

“We are trying to establish some sort of route so people know where we will be,” Wood says. “We do very little advertising. Everything so far has been by word of mouth and social networking.

“We learn something new every day,” she adds. “Whether it be a mechanical or a business issue, it is definitely a learning experience every day.”

Wood and Watnes met at Archie’s Famous Grill near the campus of University of Nevada, Reno. Until the food truck began rolling, Wood worked as a graphic designer while Watnes poured drinks and served food while she attended UNR. The duo had long dreamt of owning their own restaurant.

They obtained a small business loan to fund purchase of the truck and cover other startup costs, and they took classes from SCORE Northern Nevada to learn how to run a small business — a move that has paid off in spades, they say. The decision to operate a food truck rather than a restaurant also proved much easier as they cut their teeth in business ownership.

Wood and Watnes rotate shifts each day from taking orders to running the grill. Their biggest day to date was Earth Day at Idlewild Park, when they sold more than 250 sandwiches in five hours. GourMelt uses several local vendors, such as House of Bread and Reno Egg, as well as produce from local farms.

“We were working on this for a very long time before we opened and had many nights of trial and test cooking,” Wood says.

The owners say they have been approached several times about franchising the idea, and they also have debated on operating additional trucks in the future. And their dream of owning their own restaurant remains alive.