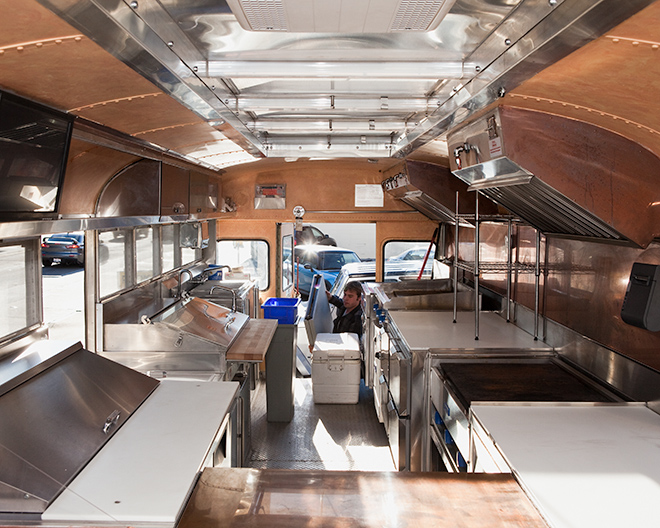 Instead of food truck standards like tacos and sausages, Le Truc is serving up locally sourced, seasonal menus out of the 66-passenger vehicle. The unconventional eatery might be housed in a 1983 Ford school bus, but with a gourmet kitchen, skylights and indoor seating for up to 12, Schick says he designed his rolling restaurant to be a destination dining spot that just happens to move.

Thanks to the semipermanent location — you can find the truck parked at the corner of Fourth and Brannan streets in the city’s South of Market district — Schick and his business partner, Blake Tally, won’t have to rely on Twitter to notify would-be customers of their location the way other food trucks do.

Instead, followers will be first to find out when Schick is pulling fresh cookies out of the oven or when sliders are discounted. By using Twitter in this way, the restaurateurs hope to appeal to the demographic in their SOMA location. “We want to attract the recent college graduates to 35-years-olds that love street food,” said Schick, a former private chef and restaurant consultant.

A natural extension of the food cart boom under way in places like Portland, Oregon, Le Truc is for the foodie-techie crowd that wants great grub in a spot without a dress code — good thing you can wear what you want in a Wells Fargo bank parking lot.

Diners should appreciate the inclusion of an outdoor credit card kiosk — no more scrounging for crumpled bills and free-floating change to pay for a bacon-wrapped hot dog.

Le Truc has developed a point-of-sale system similar to those in some upscale convenience stores and gas stations: Rather than overwhelming the kitchen staff with questions and orders, patrons sidle up to the kiosk outside the bus, browse the menu according to dietary specifications, and order their food electronically. An online version allows orders from computers or mobile phones — when the food is done, the system sends a text.

Le Truc’s computer brain also recognizes repeat customers — when you swipe a card, it remembers what you last ordered. Big Brother might be watching, but he gives you loyalty discounts.

The Le Truc bus opened Tuesday, serving up savory sandwiches made with ingredients like grilled Portobello mushrooms and ground-chicken meatballs (mom’s recipe). The technology is still in beta but the food is not.

Currently, Le Truc’s operators are lobbying to serve alcohol for food/beer pairings. They also plan to set up for dinner (and maybe al fresco movies) in a second location a few blocks away near San Francisco’s South Park neighborhood, home to many dot-com startups over the years.

Somewhere down the line, beer freak Schick is hoping to brew his own ales. The planned Le Truc Artisan Beer Works will be a collection of sour, saison brews flavored with elements from the menu (like chanterelle mushrooms and Japanese yuzu). As if that weren’t ambitious enough, the Le Truc crew has been working with the city’s planning department to gain a spot in the mobile food truck Narnia that is the Upper Market/Castro area.

“Street-food people are crafty,” said Dan Sider, ombudsman for San Francisco’s planning department. “Le Truc has got something that’s pretty unique. They worked with the planning commission and lobbied for a particular set of rules that would allow for their bus to exist.”

Tuesday’s debut went well, with the bustaurant quickly making its mark on the SOMA food scene.

“The first day was awesome,” said Tally. “We sold out of almost everything.”