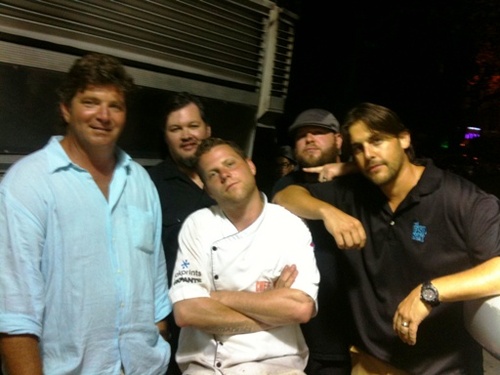 This weekend, the finale of Food Network’s The Great Food Truck Race is being filmed all over the streets of Miami. Two trucks are competiting to win the title and take home $100,000. Hodge Podge, from Cleveland Ohio is taking on The Lime Truck from Irvine, California. Their goal is to drive around our city and serve food to our fair citizens. The team who sells the most meals at the end of the weekend wins!

Since the trucks are not allowed to communicate via Twitter and Facebook, Short Order is bringing you updates as we receive them. Follow this live blog all weekend to find out menu items, info on the chefs, get pictures and to find out the locations of the trucks. When you eat at one of the trucks, please post a comment – we’d love to hear your thoughts on who you think is going to win and how they stack up against our home town truckers.

8:31 p.m. BOTH TRUCKS ROADBLOCKED TO LITTLE HAVANA!!!! Neither has a set destination but if you know Little Havana, you know there’s only one restaurant they both want to park in front of.

8:13 p.m. Rumor has it that The Lime Truck is moving to Little Havana. Not sure if that’s the best possible planning, but it all depends WHERE in Little Havana they’re going (though the grove gets kinda busy as it gets later)…we’ll keep you posted as soon as we know further details.

7:57 p.m. Here’s The Lime Truck’s menu for tonight. they really stepped up their game. As the annoying Randy Jackson would say on American Idol – “they’re in it to win it!”:

OMG! Sounds delish. I’m walking the dogs then headed there. Who’s joining me?

6:54 p.m. OK – The Lime Truck will be at St. Stephen’s Church at 2750 McFarlane Road in Coconut Grove for dinner. This is a great location about a block from Cocowalk.  New menu, including a new ceviche with shrimp, real shaved wasabi flown in from Japan, a pork loin and new beverages. They’ll start serving at 7:30 p.m. so bring your appetite! I’ll be there! (Laine Doss)

Hodge Podge will be at Tobacco Road until 2am (unless they get roadblocked by the show’s producers or something).

Still waiting on exact location, but The Lime Truck will be in Coconut Grove tonight for dinner.

Will update with dinner menus and exact location for The Lime Truck as we get info.

6:00 p.m. Spent the afternoon at Tobacco Road, having lunch at Hodge Podge Truck. Chef Chris makes amazing tuna wontons. What made it for me? the slivers of peach mixed with the incredibly fresh tuna was a refreshing and light lunch option on a very warm day. Sweet potato tots with truffle oil were good, but very filling and rich.

Met some fans wearing Lime Truck t-shirts, Rose Sisto and Lola Cruz. They had come back from Lime Truck, where they had the red curry mussels, crab and scallop ceviche, fried chickpeas and philly cheesesteak fries (basically everything on the menu). They said everything was fantastic (and I agree, having tried Lime’s food yesterday) and reported that 20 Lime Truck fans actually flew in from California to support the guys. That’s dedication (and love).

Rose and Lola then took photos with Chef Chris next to the Hodge Podge truck, while wearing their Lime Truck shirts. Chef Chris is a sport!  They had the steak tartare with foie gras and tuna wontons from Hodge Podge. The verdict? Lola said that although both dishes were good, she likes a little more spice in her food. Chef Chris said he didn’t want to compete with the foie gras – agreed. (Laine Doss)

Heading out there now to try some lunch. Will share photos of the food. (Laine Doss)

12:20 p.m. The Lime Truck is actually staying by The Melting Pot on 157th and Biscayne. Guess they checked out the Haulover locale and it wasn’t to their liking. The menu for lunch is same as yesterday’s dinner – crab and scallop ceviche, res curry mussels, philly cheesesteak fries and fried chickpeas with mint, feta cheese and olive oil. This is really good light fare for a hot Miami afternoon (plus some indulgent fry action). (Laine Doss)

11:40 a.m. The Lime Truck is on the move. They’re going to The Haulover Beach Marina Food Truck Rally for lunch. This is a great time to enjoy the beach and try The Lime Truck’s food. We had the crab and scallop ceviche and red curry mussels yesterday and they were really fabulous. (Laine Doss)

​10:30 a.m. Chef Jason and The Lime Truck have announced their lunch location – in front of The Melting Pot at 157th and Biscayne Boulevard. This is great news for the North Miami/Aventura crowd. (Laine Doss)

10:15 a.m.: Good morning everyone – hope you’re getting ready for lunch. Chef Chris and the Hodge Podge Truck will be serving ALL DAY at Tobacco Road (and we mean all day and night – from noon – 2:00 a.m.).

8:21 p.m.: Just got word that Hodge Podge’s next location will be at Electric Pickle at 11:30. The Lime Truck will be making their way to Blue Piano Bar as soon as they get their wheels back. (Alexandra Leon)

8:09 p.m.: Hodge Podge has now been towed as well. They’ve already raised their $200, so they’re on the way to pick up their truck. Meanwhile, The Lime Truck has now enlisted a girl in short shorts and high heeled boots to market shellfish to the masses. (Alexandra Leon)

8:04 p.m.: BREAKING NEWS: The Lime Truck is being towed and needs your help to get rolling again! It’s all part of the show, but the boys are stuck at their location outside Sakaya Kitchen, with only a propane stove and a picnic table, until they raise $200. So, stop by and help them get back on the road! (Alexandra Leon)

All prices are as suggested, but you can pay more to help them win the race. If you order one of each item, you get a free Lime Truck T-Shirt, but even more tempting is the chance to win a date with one of the California hotties running the show. By spending $100 or more, you can get one of these boys all to yourself. We hear they’re all single, straight, and willing to whore themselves out for the love of food.

Look out for another location later tonight. Ahi Tuna is rumored to be on the menu for tomorrow. (Alexandra Leon)

5:33 p.m.: Richard Hales from Sakaya Kitchen just sent us an email. Dim Ssam a Gogo will also be outside Sakaya Kitchen tonight with The Lime Truck, serving up two doses of food truck goodness. Come on out to Sakaya Kitchen in Midtown Miami (near Target). We’re on our way. (Laine Doss)

5:11 p.m.: Just received info from a reliable source that Chef Chris from Hodge Podge raided the fridge of one of South Beach’s finest steakhouses. Menu selections at Hodge Podge for tonight will be:

…..and more. We don’t have prices confirmed, but we’re certain that it’s going to be a fraction of cost of the steakhouse. Enjoy! (Laine Doss)

4:30 p.m.: Just got word from Daniel Shimtob, co-owner of The Lime Truck, that they will start serving at 6:00pm tonight in front of Sakaya Kitchen in midtown! They’ll stay for a while and might go bar-hopping or clubbing afterward. Go forth and eat; and stay tuned for more updates and info. (Laine Doss)

4:13 p.m: The trucks are rolling out tonight! So far, Hodge Podge Truck will be rolling to the Miami Lakes Street Food Fiesta so be sure to say hi and try a new truck!

We’re waiting to hear from The Lime Truck so stay tuned as we post updates as we receive them!

The truckers are looking for suggestions for locations throughout the weekend. They can’t communicate via twitter – but we can call them with your suggestions.

To get these meals on wheels to a street near you, post your suggested location in the comments of this post, or tweet it to @Short_Order. Anywhere in Miami-Dade County is fair-game, except for South Beach. Keep checking Short Order to help America’s favorite truck win $100,000.

Exclusive photos of the trucks and crew filming at the Miami Children’s Museum after the jump.