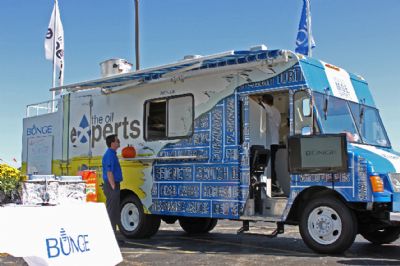 One local marketing and advertising firm is hitching its wagon to the latest culinary craze ­— food trucks.

Creative Energy has teamed up with one of its clients, Bunge Oils, to design, build and drive a food truck around the country in a marketing effort for the edible oils food manufacturer.

The inspiration for the mobile oil experts (MOE) truck came from a meeting of chefs at the Culinary Institute of America in Napa, according to Creative Energy’s director of new business, Forrest Rogers.

“Kogi, a mobile Korean food operation in Los Angeles, held a delicious mobile food demonstration at the event and the idea for MOE was born,” Rogers said in a news release.

Creative Energy bought a used Mac Tools delivery truck at an auto auction, and rebuilt it to be a fully operational kitchen that can feed 1,200 people, working with Essyx Exhibits and Displays of Johnson City. The 18-foot truck has been converted to bio-diesel and utilizes used cooking oil to partially fuel the engine, a news release said.

Chef Adam Moore, a Bunge Oils corporate chef from Chicago, is behind the wheel of the MOE as it travels to major food shows and restaurant chain franchisee meetings across the nation.

“Creative Energy is helping to set new standards for marketing and Bunge’s MOE is a great example,” said the company’s president, Tony Treadway. “While our client’s competitors are confined to a trade show booth with thousands of other food manufacturers, MOE will be on the streets of Chicago cooking up their very best for their target customers during the most important industry event of the year.”

Mobile food marketing is just one of several new trends Creative Energy is pioneering. The firm is also leveraging social media to launch consumer products for restaurants and recently pioneered a one-of-a-kind partnership of food companies to promote the “South’s Best Foods” for the Southeastern Food Processors Association, according to a news release. The promotion will reach millions of consumers in eight southeastern states during May.

“We’re taking our clients to the streets and into the hands of the consumer,” Rogers said. “As traditional advertising gives way to new ways to build relationships with current and new customers, Creative Energy is providing the leadership in how our clients can stand out from the rest.”