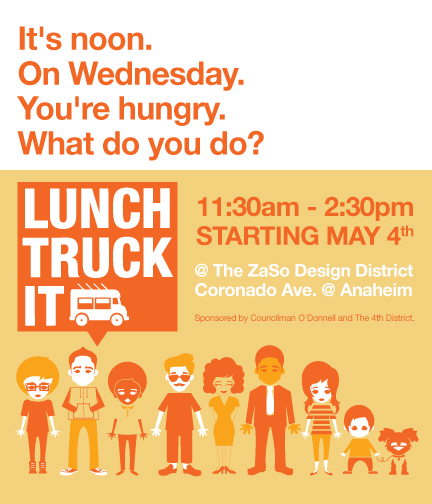 Obviously the most important story this week is the death of Osama Bin Laden. Within the past few days, every story in every news outlet has covered this historic event from every possible angle. At this point, there is very little I can say that hasn’t already been said, so instead I am going to discuss something else that is very important to me: Food.

The most American way to celebrate the demise of Bin Laden is by eating a giant feast, and thanks to “Lunch Truck It” — a new weekly Long Beach event — you will have that option. Starting this Wednesday, gourmet food trucks from all over will gather in Long Beach for the first time.

Mobile food trucks have become increasingly popular in the past few years thanks to social networking websites such as Twitter, which made the trucks easy to find no matter where they parked. However, the trucks have been banned from stopping in Long Beach for years because of a law that states all food establishments must be checked by a local city health inspector. This Wednesday, May 4, will be the first time that this ban will be lifted.

For a major foodie like me, this is fantastic news. These aren’t your parent’s food trucks. Hot dogs and tacos aren’t the only food that’s mobile anymore. The foods that will be at “Lunch Truck It” include Italian food, gourmet burgers, vegetarian cuisine, homemade candy and more. There is one truck that even sells maple-balsamic chimichurri-crème wagyu beef sliders served on a bed of white-truffle popcorn. I have no idea what that is, but it sounds delicious.

In all seriousness, I am most excited about this because it gives the citizens of Long Beach an excuse to get together for a weekly event. It is a great way to facilitate a feeling of community in Long Beach. People can gather together each Wednesday and enjoy a meal that is unique and constantly changing. I’m sure there will be a constant variety of food from varying cultures that will change from week to week. It’s a chance to experience something different consistently. Have you ever had a bacon venison burger covered in Sriracha aioli? Neither have I, but I’m ready to try it.

The event will start at 11 a.m. and will be held at the corner of Coronado Avenue and Anaheim Street, an area that is referred to as the “ZaSo District” in Long Beach. The people who own businesses in this area are hoping that this will help popularize the district amongst Long Beach citizens. If the food is actually as good as it sounds,  I’m sure it will be a success.

Sure, I could have written something about my thoughts on the death of Osama bin Laden, which is clearly a much more important issue, but by now you have read more than enough about that. Sometimes you need to change the channel from the news channel to the Food Network in order to keep your sanity. And now back to your scheduled programming.

Matt Grippi is a junior journalism major and contributing writer for the Daily 49er.