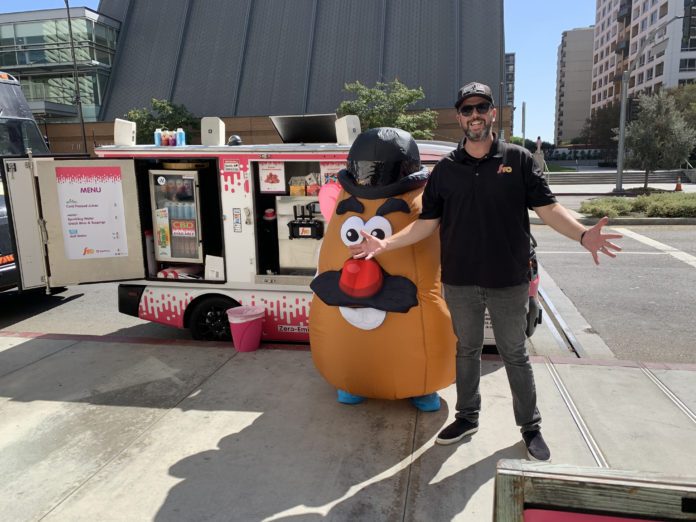 By Chris Albrecht  |  The Spoon

If there was such a thing as a Spoon Bingo card, FRO would be a winner, ticking off a number of trends we follow including sustainability, plant-based foods, and the rapidly emerging world of restaurant mobility.

Los Angeles-based startup FRO runs an electric, solar-powered food truck that serves up vegan “ice cream.” FRO Founder and CEO Deloss Pickett was formerly with Tesla, where he worked on that company’s Powerwall battery storage product. Pickett took that electrical know-how to build out the first FRO electric truck, which houses a bank of batteries to power the company’s frozen dessert offering. The truck even has solar panels to provide extra juice for the machines to keep the batteries humming.

Because all the power is supplied by these batteries, the FRO truck doesn’t need an external gas generator or to plug into an outlet when it stops to serve customers. It’s all self-contained and can last ten hours on a full charge (with a couple extra hours provided by the solar panels on a sunny day). This zero emissions aspect is a nice bit of sustainability, but it also increases the FRO truck’s mobility.

Food trucks have been around for a long time, but their very nature is undergoing a pretty rapid evolution in the back half of 2019. In September, Zume launched its first mobile kitchen, which allows restaurants to extend their delivery footprint by placing full ghost kitchens-on-wheels directly in neighborhoods, closer to customers. Then earlier this month, Ono Food launched its robot-smoothie-maker in a van, also in Los Angeles, which can travel to different parts of the city in the same day to follow the crowds (and their money).

Think of FRO as the smaller, more lightweight next step in that evolution. Sitting somewhere between a food truck and a vending machine, Pickett told me by phone this week that the vehicle is actually classified as a cart, so it can go on city sidewalks. But it’s demure stature and self-contained power supply makes it easy to set up shop quickly on college campuses, at farmers markets or in outdoor festivals.

Once set up, FRO sells a patent-pending vegan frozen soft serve. Pickett wouldn’t tell me the exact process, but it starts with Evolution brand pressed juice to which they add some vegan stabilizers to produce flavors like strawberry lemonade and citrus chocolate. We don’t know if FRO is as good as Perfect Day’s flora-based ice cream, but FRO is building on the idea that you don’t need dairy to make a cold dessert that people will want.

One trend the FRO truck is not following is full automation. A human is still on board to pour out 7 – 8 oz. desserts for $6.00 a piece. Pickett said that they had looked at creating more of a self-serve situation, but that wound up slowing the whole process down. While having a human on board does speed things up, it does deprive FRO of deeper, software-driven data insights that it could use to become more efficient in its inventory management, and location placement.

FRO is bootstrapped right now and Pickett said he’s focused on generating revenue and learning from real world conditions before he begins the process of raising money and scaling up. Though FROs are owner operated right now, it seems like once its technology has been built up and iterated, there’s no reason FRO couldn’t license out its platform to other brands in other parts of the country. That would certainly check one more box on The Spoon Bingo card.