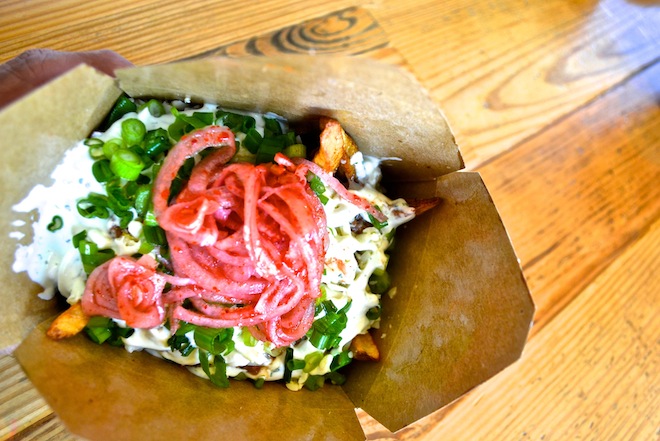 The Seoul Sausage Company has been on a “roll” since day 1. They burst onto the scene last year with Food Network’s The Great Food Truck Race and rolled to victory, winning the grand prize of $50,000 with the dream of opening up a brick and mortar shop in Little Osaka, that ramen-soaked strip on Sawtelle in West L.A.

That dream came true. From the wee eatery which is now open on Mississippi Ave., partnersChris Oh, Yong and Ted Kim serve up specialty sausages seasoned the Korean way on a soft roll, yet another way they’ve kept the Seoul Sausage momentum going.

Recently, the partners tricked out a Scion XB with retractable stoves and a grill, then emblazoned the ride with Seoul Sausage Company’s logo. This crossover meets cooktop can sizzle up enough sausages for hundreds at a time.

Spicy Korean sausages aside, there are other intriguing selections on the menu board. The galbi poutine is a controversial example. Sure, purists will bemoan how there is very little poutine about SSC’s rendition—no squeaky cheese curds or gravy, for example. In this case, it’s purely a loose homage to the Canadian snack.