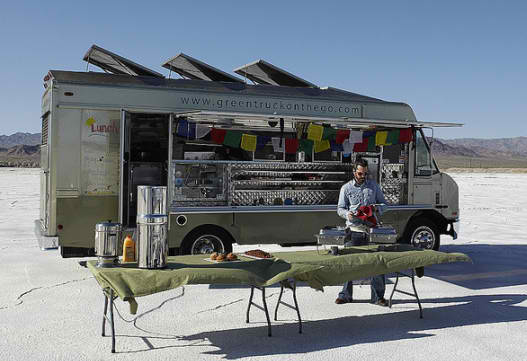 We know you’re saving money by

eating tacos or burgers from the lunch truck down the street from your work, but how much gas are these trucks wasting to keep themselves going? To get at those concerns, two friends decided to start Green Truck On The Go, a meals-on wheels deal that attempts to do as much for the environment as your wallet. (It might not be as cheap as the taco truck, but most items on its menu are under $10). And for all its transport purposes — the entire operation is run on vegetable oil and bio diesel. Currently, two trucks work out of Los Angeles and New York, but the company plans to expand towards the middle of the country soon.

We spoke to partner Kam Miceli on the truck and about the feasibility of running a truck on vegetable oil, just in case you decide to make the switch on your own car.

AltTransport: Why did you decide to run your truck on vegetable oil?
Kam Miceli: Kitchens use a lot of grease — and since we’re a mobile kitchen – it made sense to find use for all that waste. We have two seperate tanks. One tank is attached to a centrifuge system that cleans the grease and makes it into useable fuel. We also have another tank for biodiesel, if the vegetable oil runs out.

AT: How much vegetable oil waste do you produce and is that enough to run the trucks?
Miceli: Our trucks go about 12-13 miles per gallon and we have the capacity to hold about a 160 gallons per truck. Per day we go through about 60 gallons of oil ourselves, and we buy waste from other restaurants in the area too. Catercraft in LA and Lina’s Taste in NY are some of the restaurants we’ve tied up with.

AT: What percentage does your truck run on vegetable oil vs. biodiesel?
Miceli: Vegetable oil runs about 40 percent of our operations. For the rest we use biodiesel, ethanol, etc.

AT: How did you convert your engine to run on vegetable oil? How does it help in terms of price and carbon emissions?
Miceli: Plant Drive set it up for us initially, but we had several mechanics and other people work on it. We’re patenting our work and attempting to franchise it. It’s tough to calculate how much money we’ve saved, but we try and calculate it on the amount we’ve saved on food costs. And since half the food cost is oil, that is substantial. But generally speaking, it costs us approximately a $1.50 per gallon to run the truck and most of the trucks go about a 60 miles a day. So if the average gas price is at $3 right now, we’ve managed to save about half the cost. In terms of carbon emissions I dont have the exact numbers, but we tried looking at costs of oil disposals and carbon offsets and this made more sense. All our trucks get cleaned everyday, so we had all this oil anyway, and vegetable oil burns more clean than fossil fuels.

AT: Do you do it for the environment or cost?
Miceli: Both. It has to be sustainable economically for it to work. We don’t make any environment decisions unless there’s also a cost benefit. But you also have to realize that some decisions have a long term benefit. The cost of implementing a Plant Drive was expensive — but we will more than make up for it with the money saved on gas. Often, things require an upfront investment that is often difficult for management to deal with.

AT: Do you use vegetable oil in your own car?
Miceli: I do. I drive a Mercedes wagon and with that you can almost put the oil straight in because the engine is more sophisticated. My partner Mitchell does to, and we have about 10 cars that we use for the office that all run on vegetable oil.

AT: Have people been receptive to the idea?
Miceli: Most cynics are based out of ignorance. They think this is rabbit food. They call us hippies from California. It’s general ignorance and people’s unwillingness to change. But honestly, we were in West Virginia for a month for the Jamie Olivier show and eventually we realized that people were lining up for our vegan burger. People like having an alternative. And if you explain the benefits to them, nobody is going to complain.

AT: Do you see vegetable oil or bio fuel as a sustainable transportation alternative?
Miceli: It’s very specific to my business. I don’t see it working across the board. Fuel is all about distribution. This is a lot less pliable. There’s a lot of better technologies out there if I was trying to find the best alternative. Unless I owned a truck, I wouldn’t do this. In makes more sense to go electric or use a hybrid. In fact, we’re thinking of buying some electric vehicles in NY. Going green is a learning process. And you figure out what works and what doesn’t along the way.