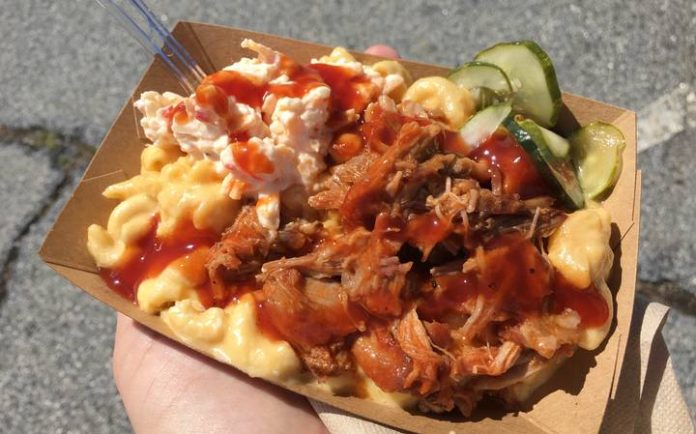 By Stephen Mays  |   The Telegraph – Macon

I’m no stranger to food trucks, so I was happy to spend Saturday afternoon trying some of the fare from the trucks on Third Street as a part of the Cherry Blossom Festival.

More than a dozen of the mobile kitchens were doling out a wide variety of meals. After a quick survey of the offerings, I (obviously) chose the macaroni and cheese-themed truck. There was a sandwich on the menu, but I ignored it, opting instead for the barbecue mac and cheese.

I realize now that I didn’t even look at the name of the truck, but it was the only one with mac and cheese written on the vehicle, which we all know is a clear indication of heaven on earth.

So this barbecue mac … 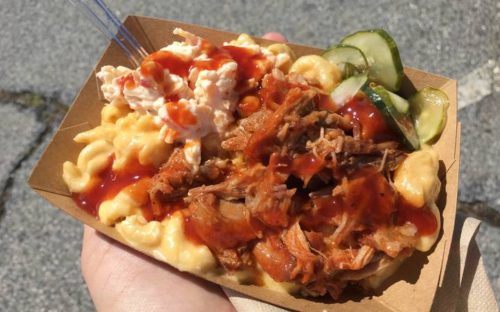 The macaroni and cheese underneath was a pretty basic blend–cheddar with slightly overcooked, limp noodles. The toppings, unsurprisingly, are what made the dish so tasty. I tried various pasta-to-topping combinations, and finished with this ranking:

2. pasta + pickles + barbecue: tender, sweet meat with the creamy cheese was offset by the crunch and tang of the pickle, making for a sweet and savory combo.

3. pasta + barbecue: soft and sweet because of the pork but with enough savory flavor from the cheese to avoid being an overly sweet letdown.

After a bottle of water and a bit of walking to cleanse the pallet, I snagged a jerk chicken dish from the Gotta Have It food truck. It caught my eye because it came on a coconut risotto. Risotto has a special place in my heart. There was also a fresh slaw on top. 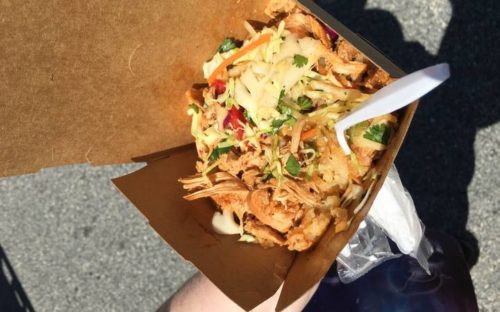 I wasn’t all too impressed. The risotto was good, thankfully, but the “jerk” chicken just tasted like sweet barbecue chicken. The slaw and risotto paired well together, but the chicken felt out of place.

I didn’t finish the meal, because the The Pup Truck, which offered around 10 different hot dogs, had previously caught my eye.

Four pups were listed as special on The Pup Truck’s menu, with the others dubbed classics, offering a mixture of what you immediately think of for hot dogs — chili, cheese, ketchup, mustard, etc. I tried the P.B.R. Pup, which was topped with pimento cheese (shocker), bacon jam and pickled red onions. 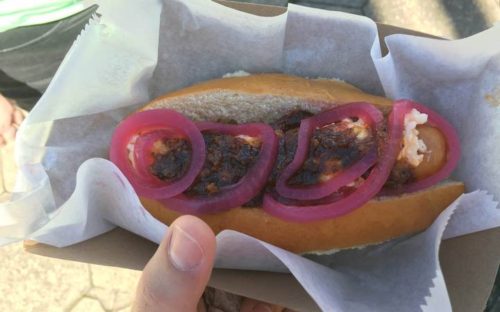 The pup itself was cooked exactly like it should have been, with a casing that gave a nice crunch when I bit into it.

The toppings were delicious, combing a bit of spice from the pimento cheese with sweetness from the bacon jam that was cut by the vinegary bite from the onion.

My friend Serena came to lunch and ordered the Kimchi Pup, which I snagged a bite of for the sake of this blog. 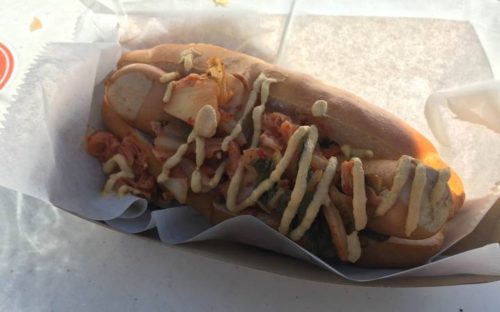 Same approval of the pup itself as before.

The kimchi felt familiar with the pup because it echoed the vinegary flavor of sauerkraut, but it of course had a bit of spice, as kimchi should. I’ve had spicier kimchi before, so I wouldn’t have minded a bit more heat, but the pup also had grainy mustard, which helped give it some more kick.

With a happy tummy, my friend and I wandered along Mulberry Street, poking our heads into vendor stalls that caught our eye. Begrudgingly, I admit I didn’t make it back to the trucks for round two (four?).

I didn’t actually feel hunger again until around 9 p.m. But you should definitely take advantage of the trucks while they’re in town. Try as many as you can, and take a friend so you can split meals, a.k.a. eat all the things.