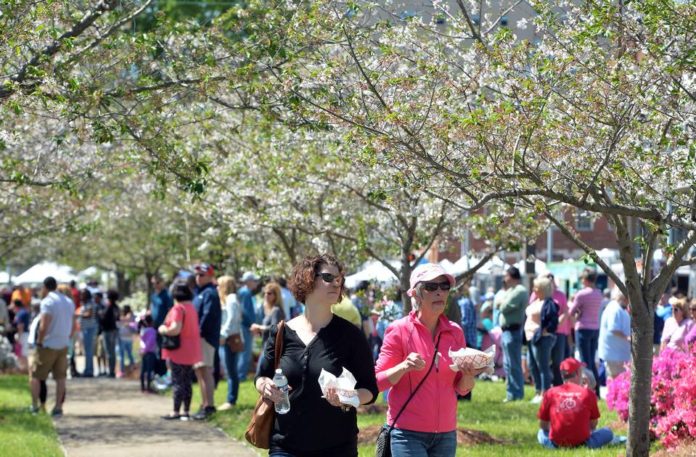 Three guys in a food truck were dishing out lobster in downtown Macon on Saturday.

The line to eat was more than an hour long.

It was lobster. From the ocean off Maine. On Third Street — which more or less dead ends at the Ocmulgee River, a body of water not known for such crustaceous bounty.

A guy from Lizella in line there at the Cousins Maine Lobster truck, which was in town for the Cherry Blossom Festival’s Food Truck Frenzy, joked that the lobster might actually be “overgrown crawfish.”

One of the cooks on the Atlanta-based truck said it was funny to hear people in these parts ask about the menu.

The truck’s proprietors have been featured on the popular television show “Shark Tank,” where entrepreneurs pitch their ideas to successful business people.

Lobster rolls — chilled meat in a salad-like blend of mayo on a hot dog bun — are a New England delicacy. They were among the most popular fare Saturday.

“What’s all the hoopla about?” asked Dana Fowler, of Thomaston, gazing at the lobster line, which stretched across Third Street near the federal courthouse. “Is it that good?”

At the front of the line, Paul and Barbara Clark, of Warner Robins, wondered the same thing. They’d waited half an hour to find out.

“It’s gonna be hard to beat the Nu-Way hot dog,” he said.

Then he took a bite.