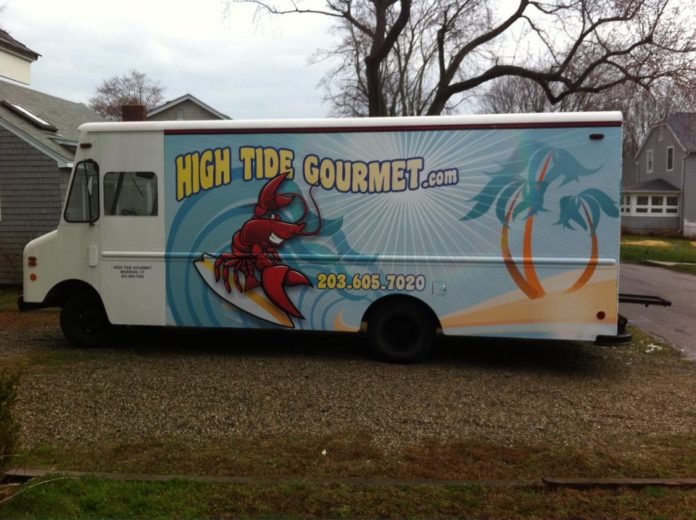 MADISON — The town’s quaint and historic center has a new addition that may not fit in with the architecture, but it’s making mouths water.

It’s an old Freihofer’s bread truck colorfully refaced with the image of a huge, grinning lobster on a surfboard, a few palm trees and inside, a fully equipped kitchen where Rich Messier creates gourmet recipes.

Each sandwich comes with a choice of potato salad, coleslaw or pasta salad.

“Everything is made here — my sauce, recipes,” Messier, 47, said. “I’m just a guy trying to make a living” and pay a mortgage, he said.

In the fall, when Madison’s population thins, he said he’ll head to New Haven to try to get the Yale University crowd to dine on his unique fare.

The reviews on HIGH TIDE Gourmet’s Facebook page shows many are liking it.

“:) If you keep the standard the same for the lobster rolls — full, real pulled lobster cooked to order, you will reign supreme in time. :)”

Giovanna Youhas had compliments for the chef beyond the food:

“My Husband, son, and I stopped the other night just to grab a quick bite…The food was great. Very affordable to feed my family and the owner was not only very welcoming and friendly, but helped us carry everything to the picnic tables since I’m 39 weeks pregnant and was holding my son’s hand.”

Lori Bessinger, who said on Facebook that she’s adamant about trying each menu item, wrote:

“…but everything I’ve had so far was soo excellent that each time I go I want the last thing I had again! Can’t wait to try all of their food so I can start re-ordering! Great food friendly service worth the trip from ANYWHERE!”

Messier, who worked at Saybrook Fish House for more than 25 years, loves what he does, even though it can get rather hot in his small “kitchen,” cooled only with fans.

When he got on the road less than two months ago, he started near the old Griswold Airport site, now a town park, but the town received complaints and asked him to move after a few weeks.

Told by town officials that they couldn’t tell him where to go — but rather just where he couldn’t go — Messier parked the truck near the Green in front of the old Academy Street School on Route 1.

There’s lots of parking and even picnic benches in place.

Messier expected complaints about the truck’s size, but didn’t get any and recently had his vendors’ permit renewed without a hitch. A town official said there are about five vendors with permits in town, but Messier said he’s the only one offering gourmet seafood dishes.

A woman who would not give her name, but identified herself as a local real estate agent, said she’s just glad the truck isn’t on East Wharf Road, where she’s got clients selling houses by the beach.

But she said it as she wolfed down a lobster roll while sitting in her Volvo.

Marianne Roach, who lives in Guilford and heard about Messier’s food through the grapevine, brought her family, who were visiting from Missouri.

Her son, Jeff, equally delighted with the taste, said he watches Food Network often and gourmet food trucks are fast becoming a trend throughout the country.

Nancy Currlin, who was passing through town with her husband, was at first enticed to stop by the big lobster roll sign.

Once at the ordering window, however, she opted for Thai peanut scallops with Asian slaw and said after, “It was delicious.”

“If I went to a regular restaurant and ordered this for $15 I’d be happy,” Currlin said. The dish was $9.

Messier, who is generally parked in his spot from noon to 8 p.m. in the summer and also at special town events, works his tail off.

Sometimes on weekends he’s not around because he also lobster bakes for parties, weddings and other affairs through his Rich’s Lobster Bake Connection.