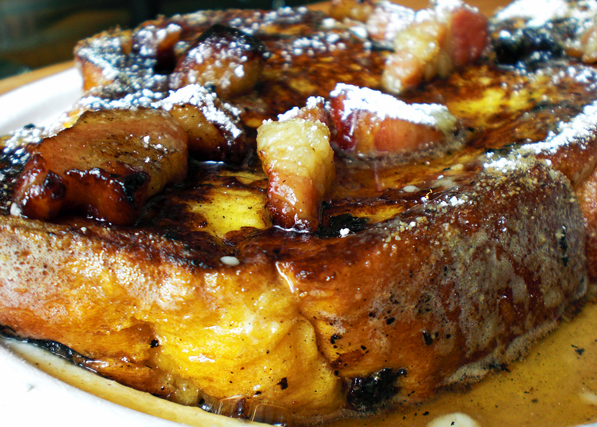 You can get fusion tacos, banh mi, and sushi from a truck, so why not brunch? Every Sunday in front of the Coffee Commissary on Farifax Avenue, you can pop by the newly launched Flatiron Truck for things like challa French toast with bacon maple butter, grilled flatiron steak and eggs, and a near perfect Spanish tortilla with arugula and homemade aioli.

Flatiron’s owner, chef Timothy Abell–who’s learned from top toques at The Hungry Cat, Water Grill, Wilshire, Joe’s and Bar Pintxo–takes the best of what he finds at the farmers ‘ markets on any given day, and comes up with a few dishes that you rarely see served from a truck. It could be pumpkin risotto inspired by fairytale pumpkins he spotted at the Santa Monica Farmers’ Market, or grilled octopus with green garlic polenta and a piquillo pepper and marcona almond salad.

“I can’t tell you how many times someone comes up and asks for a burrito,” says Abell. “But I’m giving them a real plate of food, the kind you’d find at a nice restaurant.” Even if it is served on paper plates, and you’re table is the curb.

While he considers the truck a precursor to the restaurant he hopes to open soon, it’s amazing the kind of food Abell puts out with only a flat-top grill, a warming oven, a temperamental deep fryer, an induction burner, and an immersion circulator. Yes, he sous vides on the truck.

“I had to figure out how to roast asparagus without an oven,” he says. “So we use the warming oven, which takes longer, but it comes out really soft on the inside, and then we grill it to order and serve it with wild boar bacon for brunch.”

While that is a wonderful dish, we’re partial to the French toast. Slightly custard-y from soaking in egg and milk, griddled to a golden brown, and doused in maple-bacon-butter, it rivals any we’ve tried at a sit-down bistro. Abell was kind enough to share the recipe.

For the toast: Heat the oven to 200°. In a large bowl, combine the eggs and milk.Melt 1 tablespoon of butter in a large non-stick pan over low heat. Dip the bread slices in the egg mixture, and cook until golden brown on both sides. Repeat with the remaining 1 tablespoon of butter and bread slices until all are cooked. Place in the oven to keep warm.

For the butter: In a small pot, render the diced bacon until just crispy. Add the maple syrup. When it starts to bubble, remove from heat and add the ½ pound of butter. Stir until it’s fully melted and combined, and pour over French toast. Serve immediately.