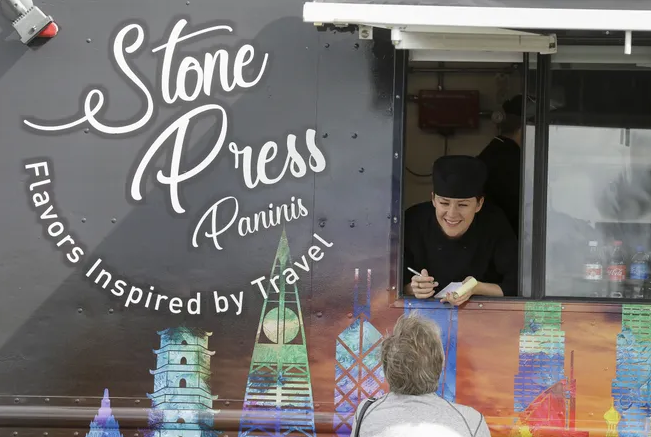 Owners Zack Stone and Gabrielle Falkey met in Marshfield three years ago and bonded over making Sunday night dinner together every week.

“At the end of last year we were talking and thought, you know what, life is too short. We want to do something that is meaningful and something we enjoy,” Falkey said.

Falkey grew up in Milwaukee and moved to Marshfield in 2006, while Stone was born in Japan and raised in a military family. He grew up in several places around the world, including Turkey. His family has a culinary history, including his grandfather, who was a chef and owned several restaurants in Chicago.

Driven by their shared passion for food and traveling, the couple decided to open a food truck and created a variety of sandwiches that incorporate the best flavors they’ve tasted around the world— from Italy all the way back home to the Midwest.

The truck will also offer seasonal options, such as a turkey panini with cranberry aioli sauce to celebrate Thanksgiving in November.

The truck had its grand opening Wednesday at Forward Bank. It will also serve customers from 11 a.m. to 2 p.m. Thursday and Friday at the bank, 1001 N. Central Ave. in Marshfield.

Falkey said they plan to keep the truck open through the winter and hope they can arrange online ordering ahead of time to prevent people from having to wait outside in the cold.

If the food truck is successful, the couple hope to open a storefront in Marshfield where they can offer more options.

The truck garnered a lot of attention before it opened this week, with its Facebook page already reaching more than 1,600 likes. Stone said other local businesses have been “phenomenal” in their support and promotion of the food truck.

“That’s been one of the coolest things we’ve discovered,” Falkey said. “There are some amazing businesses in this town that have been so supportive and have blown us away.”