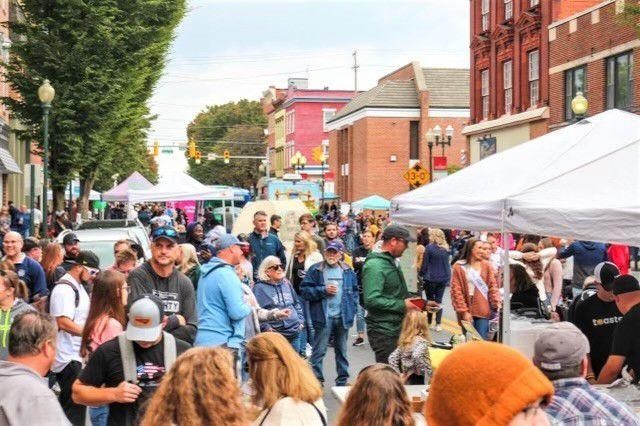 By Emily Keefer | The Journal

MARTINSBURG — The second annual Main Street Martinsburg 4-State Food Truck Fest is back this year and will take place in downtown Martinsburg from noon-7 p.m. on Oct. 22.

Advocate Insurance Group, on Queen Street in Martinsburg, is the presenting sponsor.

After drawing in thousands of people last year as the inaugural event, this year’s fest will feature 20 food trucks from the surrounding area, including West Virginia, Maryland, Virginia and Pennsylvania.

The festival is free to enter, with each truck having its own menu and pricing. Parking will also be free. There will be a beer garden, with over 15 beers and ciders on tap for purchase. There will also be a large kid zone complete with inflatables, face painting and more.

Robby Blair, executive director of Main Street Martinsburg, is looking forward to the family-friendly event hitting Queen Street for the second year in a row.

“What is cool about these festivals is that they are free. Anyone can come down and enjoy this, bring their whole family and spend as much or as little as they want,” he said. “The businesses are excited, the food trucks are excited, and it is going to be fun.”

Between food trucks, the kid zone, the beer garden, live music and more, there is something for everyone. He said that one addition this year is the upgraded kid zone — the PB&J zone (play, bounce, jump).

“Happy Hearts Preschool and Martinsburg-Berkeley County Parks and Recreation are both, in their own ways, helping to contribute, volunteer, sponsor and run this area,” Blair said. “Parents can have some peace of mind that these are screened folks that either work at parks and rec or work at a preschool already. We want safety and also, a lot of fun stuff. We will have face painting, inflatables and lots of kid-sensory activities that we are adding this year so that it is truly a family-friendly event.”

He said that while last year was a success, the biggest pitfall was running out of food due to the high volume of attendees. Blair was excited to announce that 20 food trucks would be in attendance this year and that they will be prepared for a large crowd.

“That was the biggest pitfall last year, but with that in mind, I think we pretty quickly remedied that. They know what we do now when we throw these parties, and they are going to be prepared,” Blair said.

He said that while there are already over 6,500 people who have marked that they are interested/coming to the event on Facebook, a good rule of thumb is to actually double that for expected attendees.

“Whatever the number is on Facebook that is interested in coming, you can typically double that,” he said. “It’ll be fun. I am excited.”

Blair expressed appreciation to Michelle Sadat at Advocate Insurance Group for being the presenting sponsor for the event.

Sadat has been on the Main Street Martinsburg board since 2006, and she started her business downtown in 2008.

“I am a big fan of downtown and knowing all of the things that it could be and now, the awesomeness of seeing that fulfilled and all of the investments that are coming downtown,” she said.

“I love the fact that it is such a community-focused festival. Being able to have lots of different things for kids, as well as all the foodies out there, and if you like music, it just hits all of the different interests points for a variety of people,” Sadat said. “I think food truck festivals, in general, are just so much fun. Everyone has different dietary restrictions, or preferences, and when you go to a food truck festival, you know there will be something that everyone is going to like.”

She added that Advocate Insurance Group is proud to be a part of the downtown community.

“We feel like Main Street has done such a good job of getting all the businesses together and really being able to put on fun events like this so that our community can come downtown and experience community together in the heart of it all, which we think is downtown Martinsburg,” she said. “We are proud to be a part of it, and we are happy to have our business right downtown. We are just excited about the event and glad we can participate.”

Blair added that while the football game between WVU and Texas Tech has a to-be-determined time on Oct. 22, he said that the hope is that the time for the game falls within the time of the festival so that it can be broadcasted in the beer garden. This will all depend on the time of kickoff as it is announced.

“I hope everyone has a reason to make it downtown for this,” Blair said.

For more information about the festival, visit Main Street Martinsburg on Facebook.