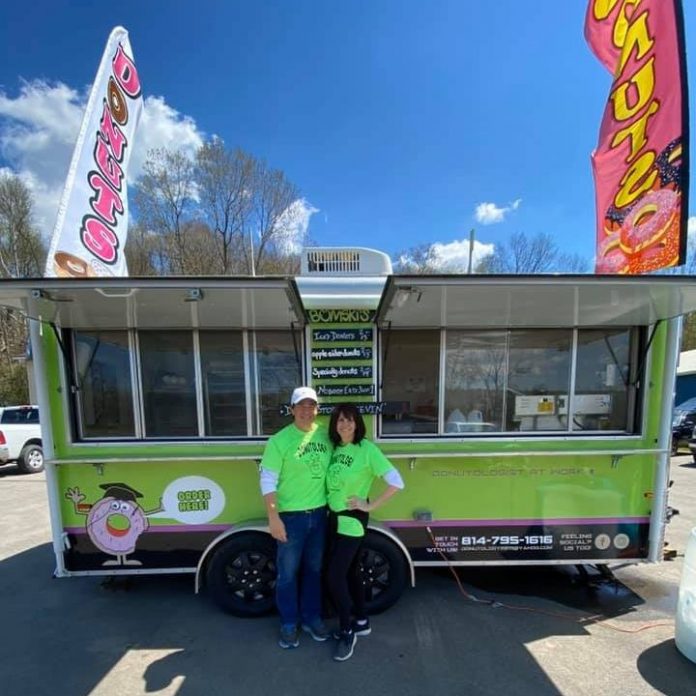 Years ago, Meadville’s Melissa and David Fink stopped to watch doughnuts being made at Peace, Love and Little Donuts during a stroll through Pittsburgh’s Strip District and instantly became mesmerized with the process.

“The creativity of doughnuts is what drew me in,” said David Fink. “It’s what keeps me busy and sets us apart. Within the first three months, we had 42 different flavors.”

Melissa Fink is to thank for most of the catchy names.

“I am just along for the ride, I really just hooked onto his dream and idea. Although I love the creativity and coming up with the names of doughnuts, even if a lot get vetoed,” Melissa Fink said with a chuckle. “That’s fun for me, trying to be clever and come up with a catchy name.”

The couple had no previous professional baking experience. However, David Fink, a national account manager for Unilever Bestfoods, has a wealth of knowledge of the kitchen and food industry from his 30 years in the business.

“I have a horrendous sweet tooth. I knew that whatever I got into would be something sweet, although I never had more than one doughnut at a time since we opened up,” he said.

His wife, though, made a complete career change. After 23 years in the property management field, she recently resigned from her job in Erie.

“It was just time for a change, time for me to leave that industry,” she said.

Her health issues also prompted some of that change – she completed her last treatment for breast cancer in March after a year-long battle.

“It certainly was for me, and for most people who have been through any experience like that, an experience that changed my perspective on things,” Melissa Fink said. “Life’s too short. After making the drives to Erie for 11 years in a row and doing the same thing, I was ready for something new and fun. I wanted to turn a bad thing into something good.”

The transition to owning a food truck was a natural pairing for the couple. “We are both foodies,” said Melissa Fink. “Since the day we met, we’re the couple that’s asking what’s for lunch while we’re eating breakfast in the kitchen.”

After their aha moment in Pittsburgh, David Fink said he spent eight years looking for the perfect trailer until he found one he liked in Connecticut. On his way back, after he made the purchase, he came up with the name.

“I had miles to go and nothing to think about, so I was just bouncing things off myself and came up with Donutology and called Melissa right away,” he said. “My background in the food service industry started in Disney where everything had a theme, I wanted something like that for our name.”

Although the business launched right in the midst of the pandemic, the Finks say they never thought twice.

“We wondered how things were going to go, but we never hesitated. This had been in the making for some time […] This was our first time owning and operating a food truck, so it was all new to us in both of those realms,” Melissa Fink said. “People were home and we were able to give them a reason to get out of the house and get breakfast.”

Since they opened, they have received a strong following, they say, getting a handful of invites each week to different locations and setting-up wherever they are invited.

The food truck is more of a hobby for the duo, though, as Donutology operates from 8 a.m. until noon on Saturdays, every other weekend.

“We really enjoy it and want to make sure it’s fun and stays a hobby. We like making it a special event for everybody else and gives us time to enjoy our weekends,” David Fink said.

The pair is also eager to use ingredients from the community. Take Choco Buzz, for example.

Named by their social media fans, it is a chocolate doughnut made with just a hint of a dark Voodoo Brewery beer and a peanut butter frosting, courtesy of Confections of a Cake Lover − both homegrown companies in Meadville.

“We have a strong passion for our community, so anytime we can cross utilize something in our own community, we take advantage of it,” David Fink said.https://tpc.googlesyndication.com/safeframe/1-0-37/html/container.html

One of the unique aspects of the food truck is its ability to offer doughnuts in a flight of nine.

Similar to a flight of wine or beer, customers can experience one of each flavor doughnut, whether it’s their Apple Cider, which is their most popular among customers, one of David Fink’s favorite’s (Apple Pie A La Mode or Choco Buzz) or Melissa Fink’s favorite (Lemon Glazed with cream cheese frosting and blueberries).

This fall, customers can expect to see new autumn flavors involving pumpkin and maple bacon, in addition to their standard Apple Cider and Lemon. They plan on operating as long as the weather allows.

Fans can follow them on Facebook and Instagram to see their hours of operations, daily flavors and weekly locations, and even help name some doughnuts. LEL