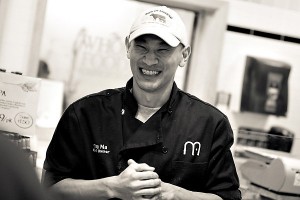 Tim Ma is Chef and Owner of Maple Ave Restaurant in Vienna, Virginia.  Maple Ave Restaurant serves American cuisine that fuses Asian, Latin, and French flavors.  Tim’s road to becoming an entrepreneur/restaurateur is a unique story.  For one, Tim graduated college with an engineering degree in which upon graduation Tim would began his career as an engineer.  As time passed, however, Tim would begin to feel something was missing from his life. Cooking for friends and family would fill that void and from that a passion was born.  Tim would take a leap from a promising engineering career to become a Chef.  Tim quit his job, sold his car and moved to New York to attend the French Culinary Institute. At the time it seemed to be an inauspicious move considering the economy was in the beginning stages of a decline. Living on a friends couch in New Jersey, Tim would commute 2 hours both ways and endure constant harassment from other chefs for being a newbie, but this would not deter Tim from succeeding.  Tim graduated with honors and began his career in St. Thomas, part of the U.S. Virgin Islands.  A decision in the March 2009 would lead Tim to open Maple Ave Restaurant in Vienna, Virginia.

Share with us why you started this company/venture – your inspiration or passion?

Tim: Hmmm, why the culinary arts, well let’s place it more accurately, restaurant ownership.  My parents had once owned a restaurant WAY back in the day, my uncle owned a really successful restaurant in the suburbs of New York City and I guess I just fell into it as well because it’s in our blood.  Now both my parents and my uncle owned what I would call a very traditional Chinese restaurant, in every way, shape and form; from food, to staff, to management, to ownership style, it was straight Chinese.  I knew that I didn’t want to approach it that way at all, so I decided that I needed the proper training rather than just raw cooking.

I won’t say every, but most chefs’ end goal is to hold dear a place they can call their own.  I went to culinary school because of my passion for food and cooking, I wasn’t a young spring chicken any longer, and it definitely takes a young spring chicken of a chef to start their own restaurant.  I got lucky in that I found the spot and the resources (mainly my friends and family) to start a restaurant on my own. The upfront investment and time to start a restaurant is probably higher than most people think, even for a dinky little place like mine.

What’s been your greatest struggle?

Tim: Staffing. Good help is hard to find.  It’s not just a saying, and it’s not just limited to one particular industry.  You can be the best chef in the world, but unless you have talented people in the kitchen to convey your message to your customers, it’s all for not.

What was your greatest triumph or achievement to date?

Tim: Six months after we opened, the Washington Post called us and told us they needed to send a photographer to take pictures of our food because we were going to be featured in their food section of the Weekend.   For us that is a great achievement.  We are a 9-table restaurant, in a small town, in an old building with limited resources, no advertising, and no connections to anyone.  For someone to say we are good, and we didn’t pay them to say that. For someone to take notice of us is a big deal.

Also, we started a small food truck named Maple Ave Xpress (MAX) basically because I trained in NYC and we took notice of that trend gaining traction up there.  We knew it was only a matter of time that food trucks would become integral in the food world down here, so we tried to jump on it as soon as our resources allowed us to.  Being a small restaurant with no PR person, no advertising department, no back office managers, etc, the only way we could connect to people was through Facebook and Twitter.  And it’s FREE!  Social media has been amazing for us and a necessity for the food truck as we only park it in office parks in Tyson’s Corner right now.  And we are only there for a limited time, so we “ring the chow bell” through social media, and they come, and we are in and out in 1 hour.  That differs from the food truck scene in DC and Arlington, where most of their customers are a result of passing foot traffic; they are there all day, every day in the same spot.  Social media does not play as big as a part in their business, but it’s a must for us.

Did you have a mentor or another company/brand that inspired you?

Tim: I did my externship with David Chang in his Momofuku Empire.  I was only there for a short time, but I learned a lot.  I have a great respect for what they do and how they do it up there in NYC, he is one tough chef to work under but that’s why he is one of the best anywhere.  But I never realized that all his yelling was because it meant so much to him until I owned my own place and found myself doing the same thing, because I wanted everything done my way, and perfect.  And when you see it is not being done the way you want it, a fire brews in your head and it comes out your mouth loudly and forcefully.  I’ve calmed down lately because if you go like that for too long, you will blow a gasket for sure.

Tim: Don’t be afraid to drop it all, and follow the dream.  Just don’t lose sight of the dream, enjoy the process. The process is what makes the dream, THE DREAM, not the goal.  Don’t make excuses for why you don’t LOVE what you do, if you make excuses you can’t complain.