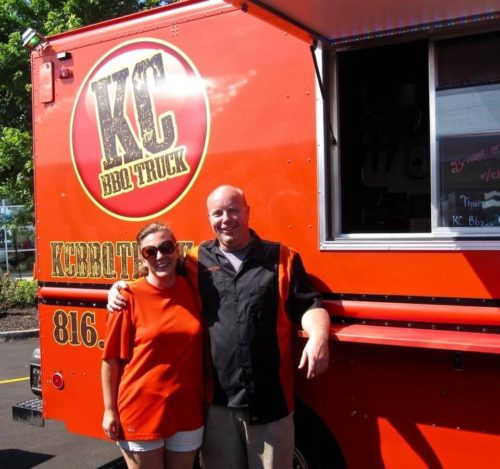 A few hours before noon on Saturday, June 27, the Crave of Kansas City food truck arrived at Aristocrat Motors for the fourth annual Food Truck Showdown that benefits Harvesters.

The truck, run by Joe and Chris Ireland and their son, Brad, Ireland, started the day serving breakfast at another location, just down the street from Aristocrat Motors, at 9400 W. 65th St., Merriam.

The Irelands expected to serve more than 300 people nachos, tacos, carnitas and other Tex-Mex items at the Food Truck Showdown.

“This will be a steady crowd, not too crazy,” said Brad, as he was making final preparations before people started filing in to line up outside the five food trucks that were on hand.

All five trucks belong to an organization called the KC Food Truck Mafia, which started in 2012 and is dedicated to operating the cleanest, most attractive food trucks in Kansas City.

In addition to Crave of Kansas City, KC BBQ Truck, Beauty of the Bistro, Bochi and Cheesy Pops’ Pizza were serving food at Aristocrat Motors.

Those who attended paid $3 for a ticket that gave them a plate of food from one of the five trucks. Many paid $15 so they could sample all five trucks.

“One hundred percent of the proceeds go to Harvesters,” said Robert Hellweg, marketing director for Aristocrat Motors. “We are paying the food trucks directly for the food they provide. At the end of the day, hopefully, we are going to raise thousands of dollars for Harvesters.”

Less than 15 minutes into the festivities, the box for the money was quickly filling up.

“The fact they are giving 100 percent of the proceeds, we are just extremely thankful for this event,” said Sam Van Fleet, Americorp food drive specialist. “It is awesome. People are bringing donations, too. It is already looking really successful.”

Hellweg gives credit to the Irelands for the success of this event.

“They have been essential to this event,” he said. “Crave and Beauty of the Bistro have been here since the first one,” he said. “The Irelands are amazing. Last year Bochi came aboard and that was exciting, and this year is the first year (for) KC BBQ and Cheesy Pop’s Pizza.”

“It is literally building a village of food trucks for the people who attend and it is all for the food pantry in Kansas City,” Hellweg said. “They do such great work. It is a really neat way to participate in a meaningful organization.

“It also brings people to the dealership who may have never been here before. We want to open the gates to everyone and let them know that this is a dealership where they are welcomed and prides itself on being part of the community.

“The very first year I knew it was winner.”

One thing that comes through clearly is how much the owners of the food trucks enjoy serving customers tasty food as quickly as possible.

Despite long hours in hot conditions during the summer time, they bring a sense of humor as they serve customers.

A sense of humor is one key to a successful food truck said John VanScoy, who works for Lori and Jeff Lee, owners KC BBQ food truck.

“I think the originality of food is important,” VanScoy said. “It’s not commercial like going to Applebee’s. You make it in the truck. It is a homemade recipe that is not found anywhere else. It is your spin on things. It also boils down to having a nice clean truck.”

Lee added that it was important to be professional and have fun. Having a limited menu is another key.

“You don’t want to have everything you can think of,” she said.

Joe and Chris Ireland said they started their food truck four years ago as a hobby and a way to work with their son.

“Now it is a full-time job and then some,” Chris said. “The prepping is not fun. This is the fun part, when you get to interact with people.”

Chris said the best part is she gets to work with her son. But a year into the business, Joe said the hobby part left when they started having so much work that they had to turn down opportunities.

For the first 18 months, they tried many different events to see what worked best. Now they do birthday parties, weddings, corporate events, graduation parties, driveway parties and festivals.

“We go to where the business is at so we are going to be busy,” Brad said. “It is not a guessing game like the restaurant business. When we do lunches, we try to move people through as fast as possible.”

Chris figures they can serve as many as 85 people in an hour when they have four people working in their truck.

A year ago, Bruce and April Durnell attended the Food Truck Showdown. They were in the early stages of acquiring a food truck. They liked what they experienced. In May, they purchased their first food truck, Cheesy Pops’ Pizza.

“We are the newest member of the Food Truck Mafia,” April said. “We work together. That’s what mafia stands for – family.”

Only a few months into the new business venture, Bruce said they haven’t had any problems finding events to work.

“The truck has sold itself,” Bruce said. “The KC Food Truck Mafia has helped and our website. But the best thing is being out here and that is how you get more gigs. Every time we go out, we triple our business.”

To learn more about the organization and various food trucks involved in it, go to www.kcfoodtruckmafia.com.

On average, these food trucks work four to five events per week. Most of them worked events on Friday and had other events to attend later Saturday after the Food Truck Showdown. But during their four hours at Aristocrat Motors, they enjoyed serving food for a good cause.

“We support Harvesters,” April Durnell said. “We think this is a great program. I’m glad we were a part of it and teamed up with Aristocrat Motors today.”