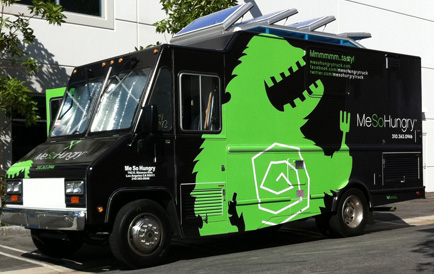 SANTA MONICA, Calif. (November 9, 2010) – You hear that? It’s the sound of the MeSoHungry Truck rumbling through the streets of Los Angeles. On Tuesday, November 16, 2010, MeSoHungry will officially roll out at Santa Monica’s Main Street lot near The Victorian and the California Heritage Museum (2612 Main Street) from 5:30 p.m. to 10:30 p.m.

Using only fresh seasonal ingredients, the MeSoHungry menu offers up a fusion of international flavors that pack a monster-sized punch. The neon green and black truck will be seen all over Los Angeles dishing out KTM Sliders with marinated short ribs, Flyin’ Hawaiian Sliders with pulled park, Tuna Time Sandwiches, Sweet Potato Fries, and much more, all reasonably priced from $2.50-$9.00. (The secret is in the Monster Sauces: Remoulade, BBQ Sauce, Chipotle Aioli, Spicy Sour Cream and Chimichurri.) Food truck aficionados can also have their Sweet Monster and eat it too, thanks to the Blingin’ Blueberry Peeps and Fried Bananas.

The twist? Executive Chef Cory Ewing will be serving up a seasonal menu of items—which means the menu will change according to what fresh produce is available.

“The quality and freshness of our ingredients will be the same as what you would find at a fine restaurant,” explains Chef Cory, who has extensive gourmet restaurant experience that includes McCormick and Schmicks, as well as The Four Seasons Hotel. “Plus, seasonal menus give customers a lot of variety. It keeps them wondering, ‘What are they going to do next?’”

A Southern California native, Chef Cory has been cooking for more than 15 years. After operating his own catering business for the last few years, the low-key chef considered opening his own restaurant—until he realized the potential for growth in the mobile gourmet food industry. Classically trained at Le Cordon Bleu culinary school, Chef Cory prefers to modernize his dishes while keeping his plates simple and infused with bold flavors from seasonal ingredients. His specialties are grilling, seafood and international cuisine. When it comes to designing his MeSoHungry menu, his motto is: “Quality gourmet food to the masses without the gourmet price.”

“We’ve already been booked for several upcoming private events and it’s only our first week out,” said Mike. “Our goal is not to limit ourselves. We’re here to make gourmet truckin’ fun.”