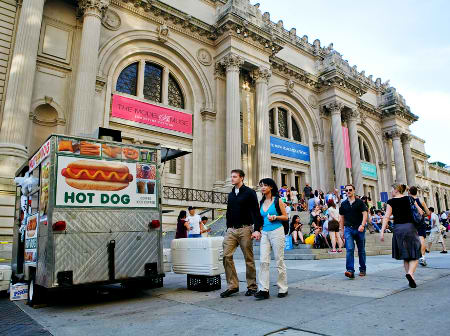 Hot dog heartache has come to the Metrop 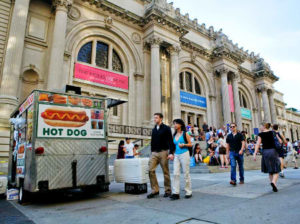 olitan Museum of Art, where the Parks Department on Friday evicted a weiner vendor who couldn’t pay his $53,558 monthly rent.

The frankfurter failure is Pasang Sherpa, 51, of Long Island City, who agreed late last year to pay almost $643,000 annually for the right to sell food and drinks from carts on either side of the iconic steps. 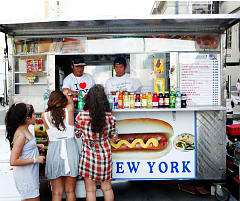 “The vendor outside the Met Museum was not paying the rent, so he was evicted from the spot,” said Parks spokesman Phil Abramson. “The termination notice was sent today.”

A worker at one of the carts who was hanging up his tongs Friday night said it brought in just $1,000 to $1,500 a day – not enough to cover the sky-high rent.

“We depend on this space. We have to pay our rent and everything. We don’t know what’s going to happen in our future,” the 25-year-old immigrant said. “I just don’t know where to go or what to do.”

Sherpa was the highest bidder last year when the Parks Department auctioned the right to sell hot dogs there.

It is the most lucrative spot in the city, in front of one of New York‘s top tourist attractions with no nearby stores or restaurants.

“We don’t know the area or where else to eat but here,” said Rhode Island tourist Joe Hyland, 32, after scarfing down a beef patty.

Sherpa said his business suffered during a long construction project near the steps, as well as a weiner war with disabled veterans who used city vending law to sell hot dogs rent-free, often undercutting his price.

Abramson said the city has seized $170,000 worth of performance bonds from Sherpa’s company, Himalaya Inc., and will pursue another $140,000 to settle their beef.

“As they are in arrears for the bulk of their contract, we are seizing their bonds and will seek the rest of the money they owe us through litigation,” Abramson said.

No decisions have been made about how to seek a new vendor there, he said.