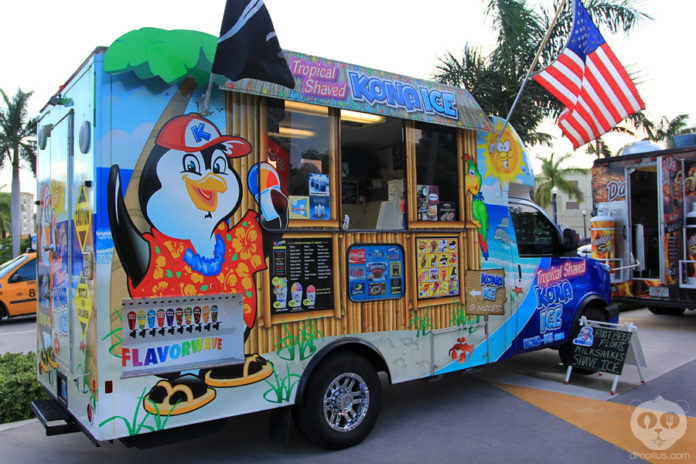 The traditional, music playing ice cream trucks from the past are being revamped into bigger, cleaner and more interactive mobile businesses in South Florida following the food truck craze.

Ice cream vendors who once only offered pre-packaged frozen deserts from a cooler, are expanding their offerings to include shakes, hand-crafted ice cream sandwiches and even a flavor station where customers can choose and pour their own syrup.

Tony Lamb, founder of Kona Ice, a shaved ice cream truck chain based in Kentucky, created his business from the mind-set of a concerned parent.

“I remember taking my own daughter to get ice cream from a rickety old truck, where the ice cream was freezer burnt and the owner wasn’t wearing a shirt and smoking, shouting at people passing by to get their attention,” Lamb said. “I just started thinking of all the ways I could improve this.”

Johnny and Sabrina Daswani from Weston, were the first franchisee to operate a Kona Ice truck in South Florida. The island-themed truck sells shaved ice and offers a “Flavorwave” on the exterior where customers can choose their own combinations of flavoring.

“We’ve had a really warm welcome,” said Sabrina Daswani, whose truck first hit the streets of Broward County two months ago. “It feels like a success when we have adults and kids waiting for the truck just as we arrive.”

The couple has plans to unroll a total of eight trucks throughout Broward County in the future, Lamb said.

City governments in Palm Beach and Broward counties began outlawing ice cream trucks and other street vendors from their neighborhoods years ago, including Coral Springs which passed an ordinance in the early ’80’s. Pembroke Pines considered a similar ban.

Although the trucks are welcome in Boca Raton, they must adhere to the city’s noise ordinance, said commissioner Constance Scott.

“I can’t get in anywhere without being invited by the city to an event,” said Joseph Banise, owner of the Fort Lauderdale-based Big Kahuna ice cream truck. “The summer is a big season for us, and we can’t park on the beach or go into the neighborhoods. It’s a nightmare.”

Jose Nieves, owner of the Joe Snow ice cream truck, fought the city of Coral Springs to allow him to do business there for months.

His truck has a 46-inch flat screen TV and Xbox system set up for kids who want to play games after ordering ice cream.

“I’m planning on driving a second truck around soon that will be specifically for street vending,” he said. “But right now I can only attend city functions and events.”