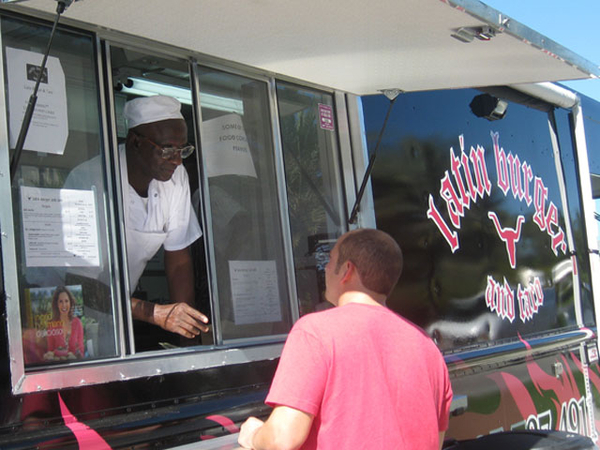 The food truck movement is taking Miami by storm as these gourmet restaurants on wheels are popping up all over South Florida.

And now, they’re joining forces to form a food truck/food court in a vacant parking lot off Bird Rd. and 65th ave.

“I follow all the trucks independently,” said food truck addict, Vanessa Safie, who came from Kendall. “Then I was like ‘wait a minute…they’re all meeting up in the same spot? That’s insane!'”

Cristy Gancedo came from Hialeah. She read about the food truck/food court on Facebook.

“I love it because it’s more convenient for me with my little one to just come to one place and be able to taste them all,” Gancedo explained.

Four different food trucks were there last Tuesday for what’s being called the Miami Street Food Court: Latin Burger, The Fish Box, Dim Ssam A Go-Go and The Gelato Truck.

And the only way to track their location is through social networking sites.

“We have a little cult following,” said Jim Heins, owner of Latin Burger. “We’re like Moses in the desert, our flock follows us around.”

Despite short notice on Twitter and Facebook, hundreds of people attended each of the first two Miami Street Food Court gatherings. And this is just the beginning. There are more trucks set to join in the near future, including a cheese truck, a cupcake truck and a pizza truck.

“I think it’s definitely a growing trend,” said David Garcia of The Fish Box, a mobile truck for the restaurant La Camaronera.

It’s also completely sanitary. The food trucks have to get cleared by the Health Department and they follow the same rules as any restaurant.

Another reason for the popularity of food trucks…they’re pretty well-priced. A full meal with a drink will cost you about $10.