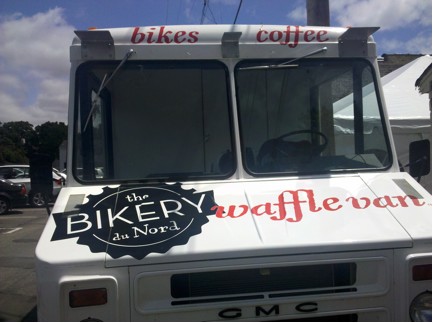 I was at the Cooks of Crocus Hill garage sale this weekend (scored a dozen nifty juice glasses for $10) when I spied someone walking around with waffle samples. I trailed the sampler to his source and lo and behold, a new food truck!

The truck churning out the squishy, sweet waffles was none other than The Waffle Van. It seems that the Belgian behind the coffee/bike cafe Bikery du Nord in Marine on St. Croix, namely Olivier Vrambout, has launched the truck in conjunction with Cooks to sell coffee and Belgian waffles. The ones I snacked on had that lovely touch of tang that makes a righteous waffle. And really, if you’re going to eat Belgian waffles, wouldn’t it be nice to have Belgian manning the iron?

Right now the truck will be mainly found at markets, festivals, and events but don’t count it out for some on-the-street waffle action. Watch its Facebook page for location information as its Twitter doesn’t seem to be fully functional yet.