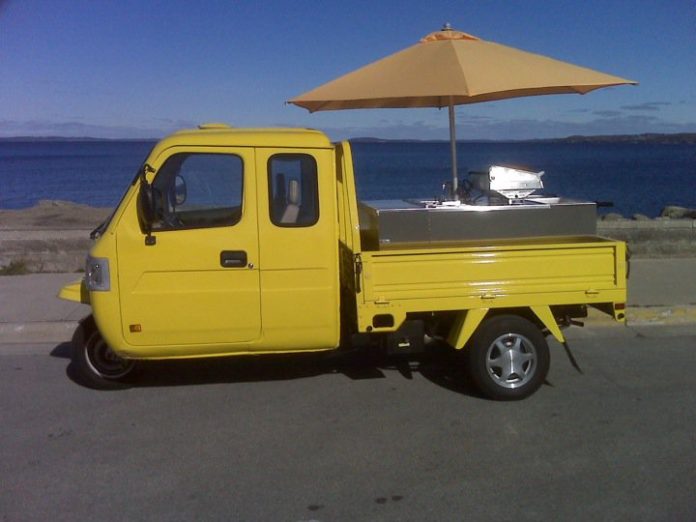 His three-wheeled, banana-yellow vehicle doesn’t just get over 40 miles per gallon. The Truck Mobile Eatery also serves up hot dogs and other food from locations around Traverse City and beyond. Sherwin had the Japanese delivery truck, which is classified as a motorcycle because of its three wheels, shipped here in October. He modified a hot dog cart to put in the bed.

“I just wanted to do something fun,” said Sherwin, 43, of Traverse City.

Sherwin previously worked in the car business, doing paintless dent removals. He had been thinking about opening a mobile eatery for several years before getting The Truck. He purposefully keeps the vehicle unmarked — no signs or advertising — though he does don an oversized hot dog hat when he’s serving franks. The mystery makes people curious; and curious people sometimes will stop for a hot dog.

The Truck’s first gig was a University of Michigan football game. Sherwin drove the 5-foot-wide-by-131?2-foot-long truck to Ann Arbor. It can go 70 mph, but once he got to U.S. 23, traffic backed up and people were snapping photos of his ride.

Since then, he’s brought The Truck to charity events and has become a regular feature at the InsideOut Gallery. When the Warehouse District venue hosts a music act, Sherwin is there to provide food for concert-goers. He spent the month of December in the Kohl’s parking lot, serving the Christmas shopping crowd. Sherwin also will show up at private events.

“People want it for weddings, birthday parties,” he said.

Sherwin tells diners where to find the moving cafe on its Facebook page, which fans can find by searching “The Truck Mobile Eatery.” That’s all “part of the fun,” he said.

Since early February, Sherwin has had a Wednesday gumbo special during lunch hour until the gumbo is gone at InsideOut. He’s able to drive the vehicle right inside the gallery through its double doors. Sherwin was recently at the Women’s Winter Tour cross-country ski and snowshoe event.

He’s served hot dogs, barbecue, various sides and other foods from The Truck, whose dishes range from $3 to $10. He’s also worked in frigid weather. Once, when he was manning the stand, the mustard froze in the bottle. Sherwin has an idea to partner with local chefs to translate fine dining cuisine into street fare. His goal is to always offer “fresh, quality street food,” he said.

Sherwin had to obtain permits and approvals from the city and county health department to operate the mobile eatery.

He tried to think of everything when he started up, right down to the unique look and bright paint color of The Truck.

“You can’t miss it. That’s why I chose yellow,” he said. “I knew it would turn a lot of heads, and that was the plan.”