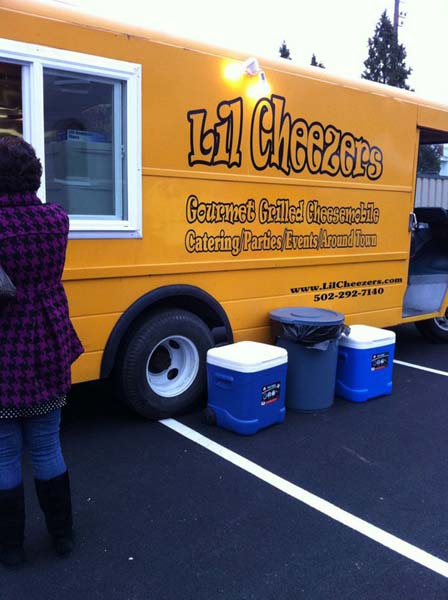 By DAVID A. MANN | NewsAndTribune.com

SOUTHERN INDIANA — Have a hot dog on Hauss, then a taco on 10th.

Pulled pork your palate’s focus? Check out Holy Smokes just off of Locust.

Grilled cheese your treat? Just look for the tweet.

In Southern Indiana, customers are lining up for lunches served not from brick-and-mortar buildings but carts, trailers and trucks. It’s a trend that’s caught on in popular culture — with TV shows like the Food Network’s  “The Great Food Truck Race.” And, with stricter regulations regarding locations in Louisville, many vendors are finding Southern Indiana the place to peddle their edibles.

“I knew it was a hot market,” said Matt Davis, owner of Lil’ Cheezers, which offers gourmet grilled cheese sandwiches. “We are literally the rock stars of the culinary world.”

There are a few items on the menu, but one of Davis’ most popular essentially amounts to an Italian caprese salad — with mozzarella, basil and tomato — on a sandwich. That comes with a side of potato chips that he makes himself.

Davis was a fan of some of the food truck TV shows and decided to give it a try for himself in January after getting small business loan. For the most part, he built the truck himself, even stopping by youtube.com to learn how to weld.

On a typical lunch hour, the business will gross about $500, he said. He moves around from day-to-day — posting his locations on Twitter (@LilCheezers) and Facebook.com (as Louisville Street Food) — normally targeting commercial and industrial parks during lunch hours.

“The response has been incredible,” he said.

In Floyd County, Rick Macina, a 58-year-old Elizabeth resident, has found a good post for his hot dog stand at the corner of Spring Street and Hauss Square in New Albany.

After his last job as a district manager, he said he wanted to do something a little more laid-back as a semi-retired man and began operating R and P’s hot dogs with his wife Phyllis last summer.

“I got tired of working for people, more or less,” Macina said. “Now I appreciate home life more. Plus, I like talking to people and meeting new people.”

Along with hot dogs, he sells bratwurst, Italian sausages, pork chops, hamburgers and cheeseburgers. He said he has about 20 to 30 regular customers who walk from as far as six blocks away.

“I’m not going to reach my million dollar quota this year, but that’s OK,” Macina said. “I’m happy with it. I think business will pick up more now that the weather’s getting nicer.”

Brian Hughes, who described himself Monday as a fairly regular customer, said it’s nice to see a hot dog stand in New Albany.

“I like food in general and I like the idea of food carts,” Hughes said. “You see them in larger cities, and it’s kind of cool that we have one here.”

Those looking for hot dogs in Jeffersonville can head up 10th Street — outside of the old Long John Silver’s — to find Dennis Robinson manning P.H. Dogs.

“Jeffersonville’s really open to it,” he said. “There’s a lot of people who really enjoy the atmosphere.”

Many have commented that they haven’t seen an umbrella-covered hot dog cart such as his in years, he notes.

Robinson has been selling dogs for years, but has only been set up at that Jeffersonville location for the last three weeks or so, usually between the hours of 10 a.m. and 2 p.m. The menu includes not only regular hot dogs but also chili dogs, cheese dogs and a garden relish-covered dog which is one of his points of pride.

The ingredient are of a regional variety — the buns come from Evansville, the chili is made across the Ohio River in Louisville and the dogs are from Owensboro, Ky.

Standing next to a produce stand is helping business, he believes.

Head a bit further down on 10th Street and you’ll likely find Jimmy O’Higgins flying a Texas flag over his maroon Hummer and smoker-trailer. He owns Holy Smokes BBQ and is typically parked outside of the old Thornton’s building — next to the current Thornton’s — between 10:30 and 2 p.m. Tuesday, Thursday or Friday. O’Higgins also has a Facebook page that people can locate by searching for the business’ name.

He’s been slow smoking pork shoulders for more than 10 years but a few years ago got out of real estate services in order to work full time as a mobile cook.

The business travels to many places and events but he’s been setting up in front of the old Thornton’s for nine months now — apparently long enough to win some regulars.

Jeffersonville resident Graham Louis said he usually stops by once a week.

The above only scratches the surface of what can be found out there along the roadside.

There’s apparently one or more taco trucks that operate in Charlestown and Jeffersonville, which a reporter could not locate for this story despite a few trips up and down Ind. 62 between the two cities during the last week. According to records in each county, there are 46 mobile food vendors in Clark County and nine in Floyd County.

“It seems like it has gone up,” said Dawn Stackhouse, environmental health supervisor at the Floyd County Health Department. “It seems like when the economic trouble started, people began looking for supplemental income.”

The businesses are regulated by the health departments in each county.

Lindley said they have to have much of the same amenities that a nonmobile business has — hot and cold running water in pressurized sinks and equipment to keep hot foods hot and cold food cold.

Further, the businesses are required to return to a registered commissary every 24 hours for cleaning and restocking.