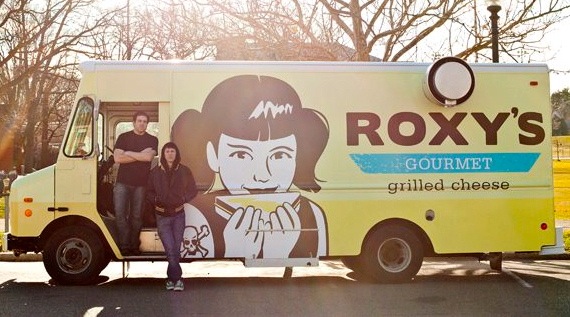 BOSTON — It’s 9:30 a.m. on a Monday in a southwestern pocket of this city and James DiSabatino has to fill up his truck — only gas isn’t what’s in short supply.

It’s the tubs of grilled asparagus and butter-poached lobster that need to be loaded, likewise, the bins of sliced brie and candied walnuts, not to mention the 11 loaves of locally baked bread — all for a mobile menu of on-the-go gourmet grilled cheese. DiSabatino’s movable feast is gearing up to feed the midday masses 20 minutes away downtown.

“Grill’s fired, dude,” barks the bearded 39-year-old chef, Marc Melanson, from the back of the rickety rig, dubbed Roxy’s Gourmet Grilled Cheese, an industrial van-like vehicle that at first blush looks primed to deliver bread, not sling it. “Ready to roll?”

After finding traction in foodie hubs New York and Los Angeles, fancy food trucks are rolling out across the country and into the broader culture, dishing up everything from gussied-up standard fare (hot dogs heaped with homemade apple-horseradish slaw) to fusion fare (pulled-pork-topped Belgian waffles) to, well, confusion fare (a PB and J, fried egg, bacon and marshmallow sandwich, anyone?). Some are solar-powered. At least one hands out blankets for impromptu picnics.

Construction-site coffee wagons and roach coaches these aren’t. The new generation of trucks, wrapped in sleek, design magazine-worthy graphics, are staffed with graduates of culinary schools and high-end restaurant kitchens. They’re run by scrappy twenty- and thirtysomethings wielding private-college degrees who are “taking their skills to the street,” says Brian Lando, vice president of programming for Food Network, which has helped fuel the trend with its Tyler Florence-hosted reality show The Great Food Truck Race. (Season 2 premieres Sunday at 10 p.m. ET/PT.)

What’s driving the food truck trend? “A perfect confluence of circumstances,” Tuschman says. Here’s the recipe: Take young America’s obsession with adventurous yet sustainably sourced cuisine. Add in a stubbornly sluggish economy. (For consumers, the roasted eggplant sandwiches aren’t just physically accessible to, say, an office complex; they’re financially accessible, far more than a sit-down restaurant meal. For owners, a food truck can be up and running for $30,000, a quarter of the cost of opening a sandwich shop in a strip mall.) Stir in a modern fleet of mobile kitchens engineered to turn out those red velvet chocolate-chip pancakes efficiently (and deliciously). Spread on a little serrated humor. And sugar-coat the whole enterprise with social media, which allows eaters to track — and suggest — locations, menus and specials, following the trucks as they would a band on tour.

A new kind of fast food

Instead of pub crawls, there are truck crawls, some ad hoc, some organized by outside companies. “It’s like an adult scavenger hunt,” says Stephanie Morgan, 26, a Truck Race contestant — and rare female truck owner — whose 10- by 8- by 20-foot vegan vehicle, Seabirds, serves up its signature beer-battered avocado tacos (two for $7) in Orange County, Calif., by blowing through 1½ cases of the green fruit a day. “There’s a fun to it: ‘Let’s get (to a popular truck) before they sell out.'”

The rise of literal fast food makes sense considering how the food industry has expanded, says Hudson Riehle, senior vice president of research for the National Restaurant Association, which estimates that there are thousands of food trucks roaming the USA. “A lot of growth has come not from people going into restaurants but from off-premises” services: takeout, delivery, curbside/drive-through and, now, mobile. The association introduced a two-truck, 1,650-square-foot food truck pavilion at its annual trade show in 2010; this year, that spot grew to six trucks and 2,600 square feet. It’s slated to return in 2012.

The association’s annual chefs survey revealed that food trucks and pop-up restaurants are the year’s top operational trend. Among consumers, the association found that 47% say they would likely patronize a food truck offered by their favorite restaurant; that figure mushrooms to 54% among 18- to 34-year-olds. No surprise, then, that chains like Jack in the Box and, just last month, Applebee’s have barreled their way into the independent food truck scene. Even Gap has hopped onto the chic chuckwagon, rolling out Pico de Gap taco trucks in four cities this week as part of its fall denim marketing campaign.

It’s a trend with legs — er, wheels. In a recent study by Technomic, which tracks the food industry, 91% of consumers familiar with food trucks say they view them as no passing fad. Kevin Higar, the firm’s director of consulting and research, spent three months earlier this year doing at-the-window-and-into-the-stomach investigating, sampling the savories and sweets from more than 100 trucks in nine cities at $6 to $8 a plate, basket or bowl. He estimates that the trend has rumbled into 30 to 35 cities, parking itself on college campuses and at music festivals, nightclubs, wedding receptions, farmers markets and, in an example of how meta the mobile mangia landscape has become, food truck meet-ups, which might feature a dozen of the vehicles.

But as Higar, and a fleet of truck entrepreneurs will say, success is not all about the location. Or even the food. It’s about creating micro-community centers, a farm-to-truck-to-tongue-to-share-with-your-neighbor experience. “It’s a great sort of social scene,” Higar says.

The hungry hordes are “a melting pot of any kind of person you can think of,” says Ryan Harkins, 30, who, since winning TruckRace‘s first season, has seen three-block lines form in front of his L.A. rig, Grill ‘Em All. Awaiting burgers with foie gras or fried chicken wedged in, the throngs range from families to “food nerds, hipsters, straight-up nerds, tattoo guys” and “straight-up metalheads.”

It can, and does, get loud

Clang, clang, clang went the food truck, gliding past an accordion city bus with inches to spare. DiSabatino is snaking Roxy’s through Boston’s back roads, and, despite the carefully prepped ingredients and items on board — caramelized apples, mint-infused blueberry lemonade — the $50,000, 12-year-old former hot dog mobile is a bit rough around the stainless-steel edges. There’s the broken blinker that DiSabatino has to crank by hand. There’s the lack of air conditioning (a factor on this 91-degree day, though DiSabatino swears “it never goes above a buck 20” by the grill). There’s the junk-strewn dashboard, littered with invoices, permits and stray CDs. And there’s the constant sound of banging, loose metal, which DiSabatino wasn’t used to when he first opened shop on March 1 — no matter that he’s a former metal-band manager.

“I contemplated getting earplugs,” DiSabatino says from under a black Kangol cap.

As a rule, “we’re loud,” Melanson says after a grill top pan crashes to the floor.

With the local alternative rock station blaring, the yellow Roxy’s rolls onto the Rose Kennedy Greenway near South Station, across from the red (Asian) Momogoose truck and the white (vegetarian) Clover truck.

It’s a new spot for the Roxy’s retinue, but the Clover crowd doesn’t seem concerned. “We’re both trying to serve good, fresh food,” says manager Mary Berecka, 22. “Having more trucks out here brings more people down.” The real competition, she says, is with the food court inside the train station across the street.

Clover regular Michael Micciche has decided to venture across the plaza today, after hearing from his wife’s friend, who heard via Facebook, that Roxy’s was headed here. (He works half a block away, in financial sales.) He arrived truckside at 11:15 a.m. But it’s 11:43 a.m. and Roxy’s quilted stainless window has only just opened. “I’m stalking them,” says Micciche, 41. (“We’re always a half-hour behind schedule,” Melanson explains.)

Apparently, the $5 Rookie Melt — Vermont cheddar and tomato — was worth the delay. “It’s the buttered bread,” concludes Micciche, clad in a plaid shirt, khakis and glasses, his hands greasy from a side of beer-battered fried pickles. “It’s nice and crispy, not soggy.” In fact, Roxy’s slathers its bread with a “secret mixture” of mayonnaise, spices, grated Parmesan “and one other cheese,” says a smirking Melanson, his aviators perched on his forehead. “If you don’t like mayo, get out.”

By 12:30 it’s four-deep by the window, where women in sundresses and sunglasses are awaiting their brie melts as The Ramones blast through the speakers. Some are shooting the scene — part hipster county fair, part adult recess — with their iPhones. (Another benefit to lunch-trucking it: You get to play a little al fresco hooky.)

Meanwhile, it’s five-across inside the truck, where relief from the heat comes courtesy of a few clouds, a slight breeze and a lone skylight. DiSabatino has sweat through his T-shirt.

“Ever do hot yoga?” asks employee Mike Kennedy, 24, stationed near the potato puncher under a Red Sox cap. “It’s just like hot yoga.”