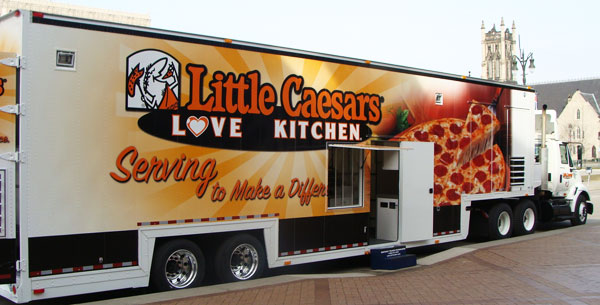 Ronnie Jordan, who has gone through drug and alcohol treatment at KARM for the past two years, was one of 512 hungry people who chowed down 128 steaming pepperoni and cheese pizzas that were made on the spot.

“Wow, it has been awhile since I’ve had pizza – it was maybe the last time they (Little Caesars) did it,” said the 45-year-old Jordan.

The Little Caesars Love Kitchen motors across the United States and Canada, meeting the needs of the homeless and the hungry.

More than 2 million people have been fed by the Love Kitchen since 1985.

It has also provided relief to hundreds of thousands of victims and rescue workers of disasters, ranging from hurricanes to the terrorist attacks on the World Trade Center.

Love Kitchen driver Dave Fox, who is on the road for six months a year, said it’s a rewarding feeling to feed people who might not have the opportunity to eat pizza often.

“It’s a treat for them, especially if you come across kids and see the looks on their faces,” said Fox.

Sue Renfro, marketing manager for KARM, said the tasty pizza courtesy of Little Caesars brightened up an otherwise damp, cold and dreary day for many.

“It’s a fun thing and it gives a reason to smile for people who often don’t have much to smile about,” Renfro said. “We are very grateful to Little Caesars.”

Tracy Hicks, KARM’s director of business and community development, said residents have been looking forward to the Love Kitchen’s arrival for some time.

“They’re so excited,” Hicks said. “Imagine, in the middle of January – for no reason – getting piping-hot pizza. What a nice treat. This means a lot to us. They (Little Caesars) have been our friend.”

Some KARM residents may already have this summer circled on their calendars. That’s when the Love Kitchen’s pizza express is scheduled to roll into Knoxville once again.

Mike Blackerby is a freelance contributor to the News Sentinel.