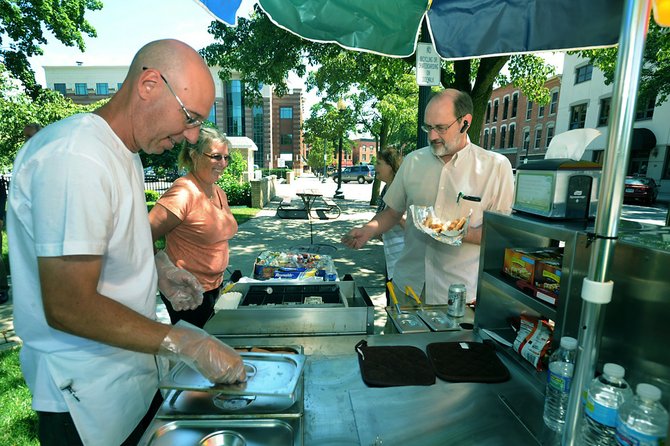 After a four-year battle that she did not relish, Cheri Sicuso began selling hot dogs Thursday from a cart in downtown Monroe.

The Dog Pound opened in Loranger Square just before noon, representing a truce, of sorts, between the Monroe woman and city officials, who had maintained that city ordinances would not permit her business.

It led to a long court battle that, technically, remains in progress at the federal appeals court level, but resulted in the city changing its peddlers and hawkers law.

“I am so excited, I can’t stand it,” Mrs. Sicuso said shortly after staffing the booth with her brother, Scott Smith. “This is what I wanted for downtown Monroe.”

The little portable food-vending business had intended to start in 2009, but its plan failed to cut the muster with city laws that defined a restricted area where such businesses could not operate.

Mrs. Sicuso applied for her license a week ago and it was issued Monday. She began selling kielbasa, hot dogs, chicken dogs, chips, pop and water and expects to do so from 11 a.m. to 3 p.m. most weekdays, changing the menu periodically based on customer feedback.

A stream of people began visiting the booth as the noon hour approached.

Stephen A. Sonntag, a computer technician and owner of Comp-U-Net Solutions, was among the first customers after hearing about the stand at a morning business meeting he was attending.

“I don’t come downtown all that often,” he said, while seated at a picnic table to feast on two hot dogs. He decided to swing by to see if it was true the stand had opened.

Under the law, the cart technically will have to move every 10 minutes. Mrs. Sicuso said she intends to comply but is not sure how it would be enforced because it is not clear how far or how much she would have to move the cart.

“I don’t know what official position is going to be,” Mr. Chappell said. “I’m hoping that does not become an issue.”

Mrs. Sicuso acknowledged she will have to sell a lot of hot dogs to catch up on the legal and attorney costs she incurred to get the business going. Court documents indicated she spent nearly $4,000 for the vending cart.

The court case remains pending with both sides still at odds over court costs and damages.

Mrs. Sicuso said she did not give up and go somewhere else because Monroe’s her home.

“We live here. My husband has got a building and he pays the city $10,000 in taxes for it. I’ve worked down here. Monroe just needs something like this,” she said.

“I hope that everyone realizes that at the end of the day, it’s not so bad,” Mr. Chappell added. “It’s not unattractive and it creates some energy.”