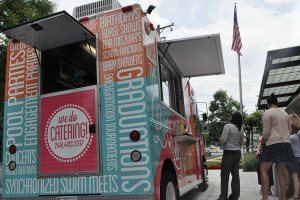 Linda Jo Kushner has learned a lot in her first summer on the Montgomery County food truck circuit.

On Friday, her Linda’s Luncheonette truck (Twitter account here) was at the Beco Management building on Edson Lane for the first time. Kushner met the owner of the company a few months ago and he almost immediately asked her to bring the truck by.

“The challenge of starting somewhere new is getting the people educated that we’re here. It helps when a building invites you because typically they’ll advertise for you,” Kushner said. “I’m on my fourth month and it feels like my 15th year. You learn a lot really fast.”

Kushner will occasionally push into Bethesda. She stopped at Wisconsin and Norfolk Avenues last Friday. But drumming up food truck business in Montgomery County is easiest when people know you’re coming.

Her truck does comfort foods. The turkey meatloaf and tuna salad, chicken salad and egg salad sliders are both big sellers. The truck also features homemade mac and cheese, sandwich wraps and a GLT — guac, lettuce, turkey and cheese sandwich.

“It’s comfort food, but it’s a little bit healthier,” Kushner said. “It’s not 20 sticks of butter per every item we cook.”

In the fall, she’ll switch in some soup and chili offerings.

Kushner said that so far, the truck has been successful. She’s also happy the truck has been able to join the close-knit network of food trucks that operate in Montgomery. This year, the trucks have started a website and established a working relationship with county government, which is putting together a pilot program that willestablish ”food-truck friendly” locations.

“People have been really kind to us, both the people who eat from us and the people we work with, the fellow truck owners,” Kushner said. “They’re the nicest group of fellow workers I’ve ever run into.”