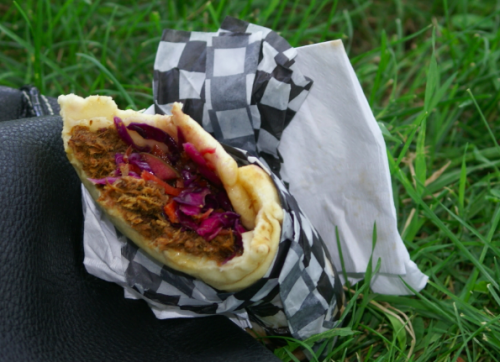 By Anastasia Voitinskaia  |  The Main 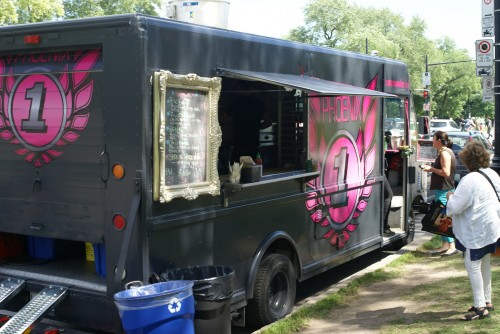 Early Sunday afternoon: tired, moderately hungover, and extremely hungry. We’re on our way to Tam-Tams, but need to get something in our stomachs first.

Thankfully, two food trucks were parked right by the statue. We made a beeline for Phoenix 1, which had a noticeably smaller lineup than its competitor of the day, Lucky’s Truck. We hadn’t heard anything about this particular truck, so we had no idea what to expect. We were very pleasantly surprised by a little something called… 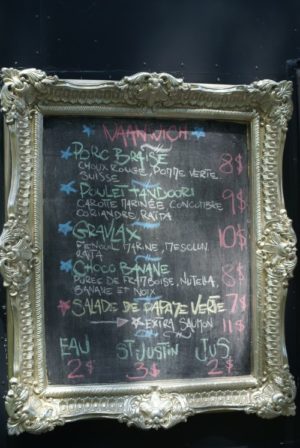 The Naanwich was probably invented by some modern-day Da Vinci who decided there’s gotta something more exciting to wrap around your condiments than dry, bland pita bread. Sounded good, so we decided to try the pulled pork variant.

We got our food within two minutes and finished it in even less. For $8, you get a hefty amount of pulled pork marinated in a sweet BBQ-esque sauce, red cabbage, shredded carrots, and small apple slices, with white cheddar cheese thrown in, all wrapped up in a good-sized piece of naan.

No complaints here; the flavours worked together incredibly well. The naan was absolutely fucking delicious, and impressively, didn’t get soggy at all, in spite of the generous amount of sauce. (Just watch out, the ‘wich will drip, and will ruin your favourite skirt/pants/shorts if you let it). 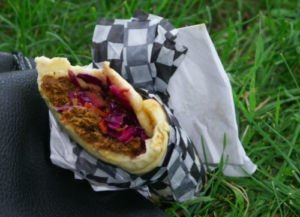 It could’ve been more satisfying, though. Some other food trucks definitely give you more bang for your buck, especially seeing as you’re doling out more than you would at a typical fast food restaurant.

Disregard this truck’s slightly gaudy exterior. Give it a try. The menu is small compared to other trucks, but everything on it sounds/is mouthwatering. They even offer a dessert consisting of bananas and chocolate wrapped in naan. So be sure stalk them on Facebook, and go get that Naanwich.