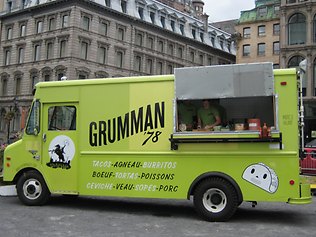 FOR half a century Montreal has embraced fine dining and rejected street food. But a humble taco truck might just be the first shot fired in a foodie revolution.

Montreal has much in common with New York, barely an hour’s flight due south. Both are celebrated culinary capitals. Both were settled by European immigrants with thick accents and thicker cookbooks. Both are unbearably cold in winter, yet have a vibrant street life throughout the year.

Montreal should, by rights, be the Canadian equivalent of New York for street food, yet in this proudly francophone city the practice is illegal.

Montreal’s lack of street vendors can be traced back to Jean Drapeau, the bombastic mayor who ruled the city for almost 30 years until 1986. He took to eradicating street food as if it were a cockroach in a kitchen (he also nixed pinball machines).

“In Montreal the health department wanted to be able to visit a physical building and stick a sanitation rating to the window. They didn’t want to have to run after food trucks,” Dufour says.

For a long time, Montrealers weren’t aware they were missing anything. After all, the city’s culinary landscape is amply populated by award-winning eateries that lift French culinary traditions to dizzying new heights. Take Au Pied de Cochon, one of Canada’s best known restaurants, founded by chef Martin Picard in 2001. For a decade, nose-to-tail aficionados have travelled from far and wide to tuck into delicacies such as duck in a can, foie gras burgers, happy pork chop and fries cooked in duck fat. PDC (as locals know it) became the crucible for a new generation of street-savvy chefs such as Hilary McGown, who teamed up with Marc-Andre Leclerc last year to create Grumman 78. The pair bought a boxy old German truck from the fire department, gave it a $C25,000 ($24,600) makeover and repainted it in the original, rather eye-popping, shade of chartreuse green.

Before their first taco could be sold, they ran into trouble.

“The law is very clear about selling food on the street. It’s illegal,” says Gaelle Cerf, the company’s manager, another PDC alumna. The team found a loophole by declaring their new business on wheels a catering venture. The truck can sell tacos only on private property and at festivals, but given that between May and September Montreal hosts no less than 67 big festivals, it effectively gave them a street food licence.

The big green truck has been a smash hit all summer, serving innovative twists on the Mexican staple snack, including banh mi-style braised pork tacos and a vegie version featuring black beans spiced up with cumin, wrapped in a soft corn tortilla and topped with pickled onions, fetta, radishes and coriander. Priced at about $C10 for two, they’ve got to be the city’s best gourmet bargain.

The Grumman venture mirrors the taco truck trend that has been sweeping the US for several years, particularly in Los Angeles (where the cult Kogi Korean BBQ-to-Go launched in 2008), Portland and New York. Unlike those cities, where food trucks are a long-established tradition, Montreal’s is the first of its kind.

“Some of our local customers walk around the truck a little confused,” Cerf says with a laugh. “They’re unsure of where to order, pay and receive their food. But people who have travelled a bit just dive right in.”

Montrealers are catching on fast, eagerly tracking the truck’s daily locations via Twitter.

“Food trucks are a great way to let young chefs with good ideas try out something new without the expensive real estate of having a restaurant,” Cerf adds.

One truck might not a trend make, but the Grumman 78 team has received so much enthusiasm and support from the public and other chefs that they’re helping other restaurants set up trucks and aiming to form a collective of gourmet food trucks in the city.

So, is this the start of a food- truck revolution for a city once obsessed with sacred French traditions and long lunches? The talents behind Grumman 78 are counting on it as they take their delicious message to the street.