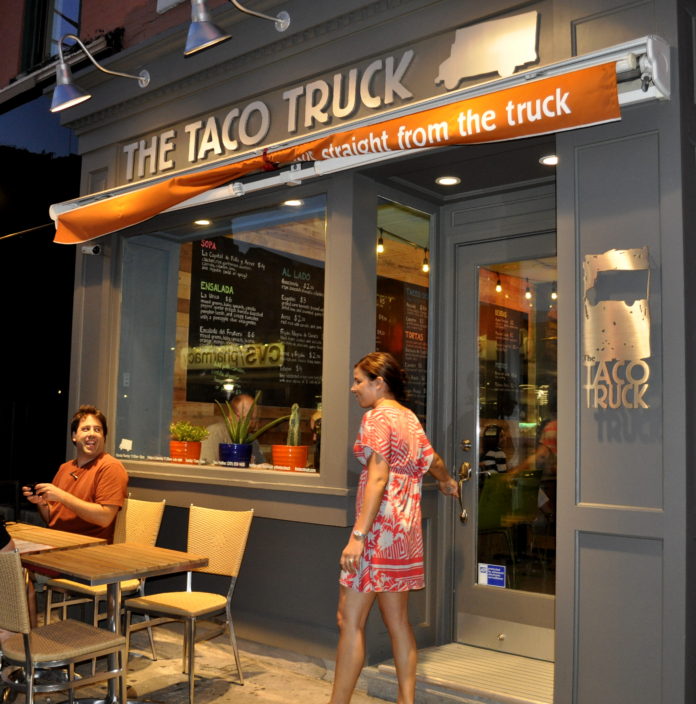 By The Associated Press

HOBOKEN — Along the waterfront, with postcard views of Manhattan across the Hudson River, sweaty devotees of The Taco Truck line up to order lunch, scooting back to cooled-off jobs to eat their slow-braised sweet pork or long-grain rice and beans.

They were lucky. The bright orange beast on wheels doesn’t come around to their spot quite so often since a new brick-and-mortar sister restaurant opened just up the street.

“I like being outside, but you’ve got the AC at the store — oh yeah,” said Michele Ward, a health club fitness director.

Office workers here have been feasting on the truck’s Mexican street fare as food on the move has taken off around the country. Food trucks have grown so popular in some areas that a growing number of young operators like Jason Scott in Hoboken are becoming less, er, mobile.

“If your biggest dream is to keep a truck out on the road forever, I think that’s great, but I knew that we wanted to do this,” said Scott, who left behind a sales job for a fly fishing equipment company. “I knew that the truck was going to be the first step to getting a restaurant open.”

In west Los Angeles, Chef Roy Choi — a phenom in mobile food — changed concepts altogether from his often-imitated Kogi Korean barbecue taco trucks when he opened his restaurant, Chego, in a strip mall April 7. He’s doing affordable rice bowls indoors without tampering with the truck menu that earned him a best new chef mention from Food and Wine magazine earlier this year.

“They get bored,” Kate Krader, the magazine’s restaurant editor, said of the trucks-and-bricks business model. “They keep having ideas and keep wanting to test them out. He’s flexing new muscles.”

Greg Drescher, the Culinary Institute of America’s executive director of strategic initiatives, invited Choi (he’s a CIA grad) to cook at a conference last year that focused on the fast-growing street food culture. Trucks, he said, are a way to establish brands quickly and build communities of fans with fewer costs.

Feedback from the hungry is instant and welcome, but mobile operators can face unique logistical problems. Some, including The Taco Truck and Kogi, tweet locations daily as they search for spots that won’t result in fines. Health rules differ from town to town and often require off-road commissary kitchens that add to expenses.

Doing both is the best of both worlds. “They’re expanding their revenue with the restaurants but also making life a little easier in terms of support for the trucks,” Drescher said. “That’s different than hoping to God in a lingering recession your customers come to your restaurant.”

Jerome Chang, who trained at the French Culinary Institute, and partner Susana Garcia met while working as pastry sous chefs at Le Cirque in Manhattan. In 2007, they hit the streets with their DessertTruck, an haute confectionary serving the New York University dorm crowd. Seven months ago they opened a Lower East Side pastry shop and cafe, DessertTruck Works.

“It was always our intention to open a brick-and-mortar space, but a fiasco with our first street vending permit forced us to open the space sooner than expected,” Chang said.

They were forced to take the truck out of service a year ago after beating Chef Bobby Flay on a Food Network throwdown over chocolate bread pudding and turned to getting the restaurant open.

“The transition was slow but smooth,” Chang said. “It was well received by our customers but it became clear within a few short months that the truck had an appeal that couldn’t be replicated with the store. While business has been good, we knew we needed the truck to keep our business edgy.”

The DessertTruck — the truck — is running again on a short-term permit and the young foodies are searching for a more permanent solution.

Marshall Jett and his business partner, ex-wife Errin Byrd, remain committed to mobile service after opening a pizzeria in the Seattle neighborhood of Ballard. In 2004, they attached a terracotta wood-fueled brick oven to a utility trailer and sold $700 worth of artisan pizza at a farmer’s market the first day.

“Wherever we go we make the pizza dough, which is unheard of,” said Jett, a former school teacher. “It was a hobby. We had no idea that it was going to be extremely popular and we would launch a restaurant.”

In addition to the pizzeria, they now have six mobile carts, including one in Spokane, 300 miles away in eastern Washington, and one serving Bend and Portland, Ore., a city that loves street food like no other.

With nearly 600 carts in Portland, most of which park under permit in designated lots, the city has turned into a world class proving ground, offering owners menu flexibility, low startup costs and relatively mild winters. Some — but not many — have added brick and mortar, said Brett Burmeister, editor-in-chief of the blog Foodcartsportland.com.

John Doyle and Sean Brown may be the granddaddies of the trucks-and-bricks approach. Doyle, a former art historian, and Brown, an actor and writer, were teaching English in South Korea when Doyle fell in love with a rice-flour pastry, Pung Ap Bang, that’s baked in the shape of a fish (but not made from them) and traditionally stuffed with sweet custard or bean paste.

Moving to Portland, with cast iron, fish-shaped baking ovens shipped over from Seoul, they opened the No Fish! Go Fish! cart in 1997, developing their own recipe and stuffing their cute sandwiches with meat, cheese and vegetable combinations. They paired them with homemade soups and opened a restaurant three years later.

Brown hasn’t worked the cart in 10 years, preferring the restaurant. Doyle’s at the cart every day.

“I love it,” Doyle said. “I work by myself so things almost never go wrong and if they do, I know who to blame.”