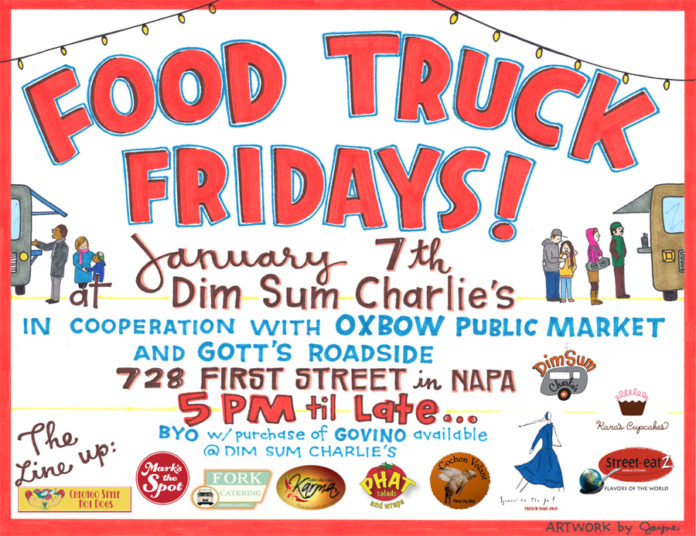 By Napa Valley Register Editorial Board

Food Truck Fridays is a victim of its own success. The city of Napa looked like it was playing fun police last week when announcing that the popular monthly event near Oxbow Public Market was being shut down until it could acquire the necessary use permits.

Four hundred hungry consumers turned out in March to enjoy the affordable and diverse cuisine from nine different mobile eateries.

But the event’s size and popularity are exactly what forced its deficiencies onto the city’s agenda.

Code enforcement has not been a demonstrated priority for the city — count the banned A-frame signage still peppering the downtown sidewalks two months after a restrictive sign that ordinance passed. But when an event grows 400 consumers strong, the city has to take notice.

And these are not A-frame-caliber concerns: Four hundred diners, no on-site bathrooms. Alcohol, no alcohol permits. Fire pit, no nearby fire extinguisher. Not even an extra garbage can.

Food Truck Fridays is a fun, festive, flavorful gathering … and an accident waiting to happen.

More than 1,000 people turned out on Facebook — on a “Save the Napa Food Truck Up” page — once news came that April’s party was being pooped on. “Trying to stop the bureaucrats from shutting down the First Friday Food Truck Gathering,” reads the page.

Those grumbling about an “anti-business” city hell bent on spoiling the party, should realize it would be their tax dollars funding defense of a Food Truck Friday lawsuit.

If the city looked the other way, taxpayers could be liable for injuries, drunk driving incidents or any other accident stemming from this event. But a day in court could happen without an incident. Lawyers for a customer seeking access in a wheelchair could sue right now. The site does not have proper railings or ramps in accordance with the Americans with Disabilities Act.

Bathrooms, alcohol permits, fire extinguishers, wheelchair access. These responsibilities apply to all restaurants, with or without wheels.

Public outrage notwithstanding, the city had to act.

And it has done more than that.

Napa knows how much residents enjoy this event, and it’s trying to come up with a solution.

The city is still working with private property owners this week in an effort to find a location for a food truck event for this Friday, what would be Food Truck Friday’s regularly scheduled date.

“It’s important to make a distinction between the event and the site,” said Barry Martin, Napa’s community outreach coordinator. “We want the event to keep going.”

“Just about every city you can think of is in the same situation as we are with this. The food truck trend has developed so quickly that cities don’t have regulations on the books yet.”

Whether the event finds its way back to the Oxbow area remains to be seen. Andrew Siegal, owner of Dim Sum Charlie’s and coordinator of Food Truck Fridays, has his business’ use permit going before the planning commission in April. That’s an essential first step to getting the site reestablished.

The public outrage to this event’s cancellation was swift and showed how much Napans value it, but the city is acting to protect those same Napans from a bevy of potential problems.

It’s no fun being the fun police.